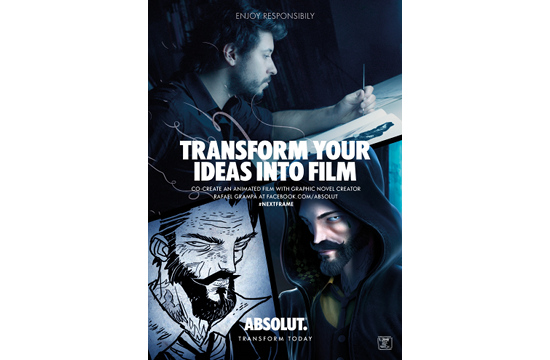 As part of the brand’s global campaign, Transform Today, Absolut Vodka has announced a new project with graphic novelist Rafael Grampá, one of the featured artists of the campaign. Entitled Next Frame, the collaboration will invite users from around the world to make plot decisions within an original graphic novel created by Grampá – as he writes it. Once the story is complete, Absolut will work with Grampá to transform the still drawings into an animated film, which will premiere at the MADE gallery in Berlin on March 15th.

Jonas Tåhlin, Absolut VP of Global Marketing explained how the project fit into the brand’s new global campaign, “With the launch of Transform Today, Absolut announced that it would be changing the way it works with artists. Next Frame is the first outcome of that promise. Grampá’s unique style of illustration has already distinguished him within the graphic novel community, but we wanted to give him an opportunity to transform his craft even further, allowing for new creative opportunities. Not only will he be co-writing the Next Frame story with online users, but he will also be imagining a fully original story in live motion – a first for him.”

Building on the Transform Today ideal of ‘The future is not a given, it’s yours to create’, the project opens new possibilities for the Brazilian graphic novelist, who’s inspirational personal story is a central pillar to the campaign. After transforming his life to follow his dream of becoming a comic book artist, he has found success by creating entire worlds out of nothing but his imagination and a pen. Next Frame challenges Grampá to transform his work even further by adapting his story on-the-fly, based on consumer interaction.

According to Tåhlin, “Absolut has always believed that collaboration can bring out new creative potential. Next Frame offers the possibility of a three-way collaboration, with Grampá creating the world and characters of the story, online users shaping the direction, and then Absolut and Grampá working together to create an animated film. Through this multi-part collaboration, Next Frame transforms the artistic process in the most true sense.”

When describing the project, Grampá explained, “I am always looking for ways to transform my work. With Next Frame, I have a chance to do something I’ve never done before by co-writing the story with users online, and also by turning the illustrated story into my own animated film. It’s a very exciting project, and I am happy to be working with a brand that allows me to try new things in the way I work.”

The Next Frame project will begin on February 3rd, when the story is introduced on Facebook.com/Absolut. Users will then have multiple points of intervention where they can decide how the characters will progress in the story. After each decision, Grampá will create the next piece of the story, inventing new places for the characters to explore -- up until the next crucial moment that users can provide input. After two weeks of international online collaboration, ending on February 21st Grampá will polish the final film, which will then be unveiled at the MADE gallery in Berlin on March 15th.

The goal of the Transform Today campaign is to inspire people to tap into their creative potential and explore their ability to create a new future.  Next Frame is the first example of how Absolut will bring this goal to life. In the coming months, additional collaborations with the campaign artists Woodkid, Yiqing Yin, and Aaron Koblin will be announced. Each collaboration will provide opportunities for users to interact and explore the inspirational message of Transform Today. 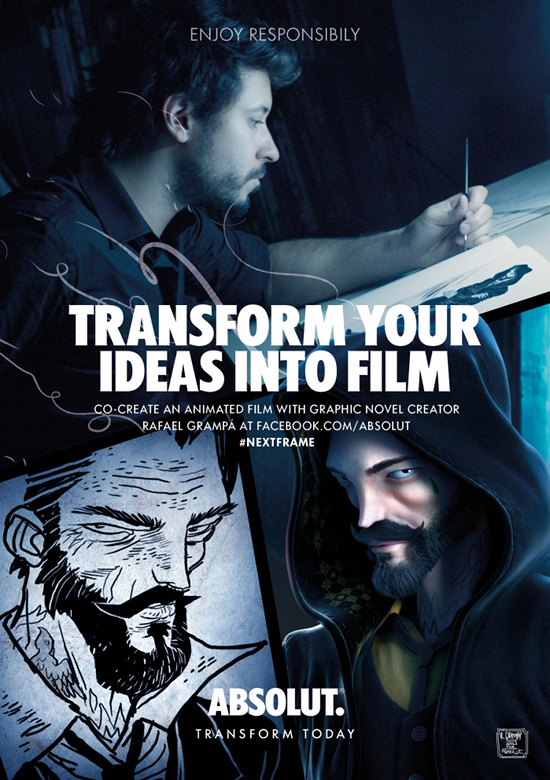