Absolut Takes Over the GRAMMYs 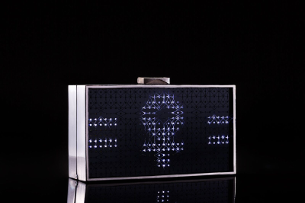 As the official spirits sponsor of the GRAMMYs, Absolut debuted their new Absolut Lime vodka with a seamless integration into virtually every aspect of one of music’s biggest nights. Building on the premium vodka’s ongoing passion and dedication to create a more open world, their bold new #refreshthetalk campaign introduced Absolut Lime and brought refreshing perspectives to red carpet conversation.

The fully integrated campaign reached all possible touchpoints at the GRAMMYs and worked across multiple channels, including:

Red carpet conversation pieces – Absolut partnered with Santigold and Skylar Grey to “refreshthetalk” on the red carpet. Each artist was outfitted with a custom-made, couture, LED-powered clutch that acted as a true conversation piece. Throughout the evening and red carpet interviews, the clutches called attention to causes important to each artist: Women’s Rights and Female Empowerment.

A broadcast partnership with Entertainment Tonight – Absolut constructed a special “Lime Green Room” interview space for ET’s use. They used the space to tape GRAMMYs segments and host interviews.

59 branded bar spaces at the Staples Center. As the official GRAMMYs After Party sponsor, Absolut Lime rolled out the lime green carpet. Each bar was decked out in Absolut Lime-themed barware and branded cocktails like the Limelight and Lime Drop were served. Select after party photos are here and below.

Digital support – The above OOH activations were further supported by Absolut’s extensive digital campaign which pushed the #refreshthetalk conversation across digital video and display ads, billboards and social content on Twitter, Facebook, Snapchat and Instagram.