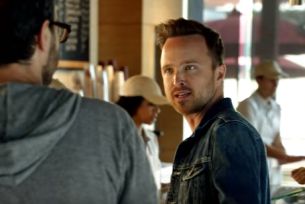 Breaking last week, a wry new campaign for Hulu - launching first via broadcast and social, followed by digital as well as new media integrations and technologies - shines a light on all too human behaviour in social situations: standing awkwardly as talk turns to a popular TV show or movie we haven’t seen. Own up?  Or attempt to seem “in the know”?

Hulu is that friend who can help keep us honest…when it comes to TV.

Broadcast spots showcase the social anxiety of those fans ‘not in the know’ desperate to keep the conversations going, including in one hapless fan’s encounter with Aaron Paul, star of hit Hulu Original, The Path.

In social, Hulu will join the already robust conversation around TV, by inviting fans to share their TV truths on Twitter using hashtag #TVConfessions. Leveraging influencers and Hulu’s Twitter channel, fans will be invited to share their confessions – the good, bad and ugly – and curate them on Hulu’s Tumblr page. Influencers also will take the deepest, darkest confessions and create an original piece of digital artwork that will be shared back to fans.

Additionally, snackable social and digital videos, developed with Hulu’s Originals talent, will roll out late May into the summer. Aaron Paul will be catching actors auditioning for a role on The Path in some compromising lies. Mindy Kaling, star of The Mindy Project, will help liars “Act Like They’ve Seen It” by sharing some of her acting tips and tricks to avoid being caught in a tv lie.

All the work, created by agency twofifteenmccann, builds on Hulu’s brand invitation to “Come TV With Us”, and offers a simple alternative to being caught in a tangled web of lies: watch all episodes of hit TV shows, premium originals and movies on Hulu.