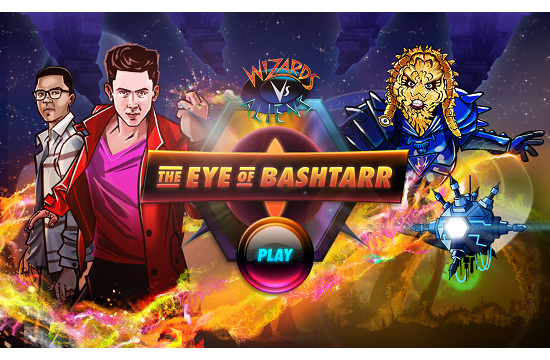 To support the launch of the brand new series of Wizards Vs Aliens on CBBC, BBC Wales Interactive and CBBC have commissioned Aardman to create a fun and fast-paced scrolling puzzle platformer which seamlessly blends drama, written by the TV show script writers, with gameplay. The game is now available on the Wizards vs Aliens site for fans across the UK.

Aardman, working alongside CBBC and BBC Wales, has created a series of fun, addictive and progressively challenging puzzle-based levels all held together by an engaging story with all the drama you would expect from an episode of the show. The games will not only increase brand engagement with the existing audience but will also provide fun, on brand, exciting entertainment.

Playing as Tom and Benny, fans embark on a thrilling adventure to recover The Eye of Bashtarr – before the Nekross can get their hands on it!  The players’ aim is to work their way through a series of fun, fast-paced puzzles in as quick a time as possible, picking up collectables along the way to gain scores. The levels are split into three episodic chapters and are all set in beautifully crafted digital Wizards Vs Aliens environments.

Laura Chilcott, Senior Producer (Digital), Aardman Animations says “It’s been fantastic to work so closely with the production team and the Wizards vs. Aliens TV writers on this project. We’ve used lots of new techniques in the production of this game. From new creative storytelling techniques, through the use of in-game comic panels, to new technical solutions such as the use of a boned animation software. Producing the game has been a truly collaborative effort between Aardman, BBC Wales Interactive and CBBC and I think this spectacular game shows how successful this kind of collaboration can be. We’re really proud of the game and we hope everyone enjoys playing it!”

Play the Eye of Bashtarr here.