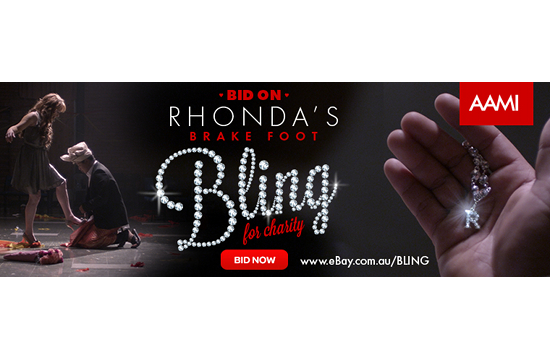 Switch Digital will today launch an eBay campaign designed to allow fans of AAMI’s Rhonda and Ketut to say goodbye to the popular couple and support a worthy cause in the process.

Such as characters in a favourite television series, there is a level of remorse on completion. So, the agency has come up with the idea to bring together  AAMI and eBay, along with Hamish & Andy, to auction Rhonda’s “brake foot bling” shoe and bracelet for charity. The auction will help fans feel they are taking part in the farewell of the characters, and potentially own a piece of pop culture. AAMI have chosen Beyond Blue to receive the proceeds from the auction and it is hoped the charity will benefit from the significant marketing investment and awareness of Rhonda and Ketut, while raising money and recognition of the valuable work Beyond Blue does.

Hamish & Andy have produced a hilarious video of support and this will go out to their two million social media fans, with eBay promoting the competition from their home page during the 10 day auction period.

Richard Riboni, Marketing Manager AAMI said, “We have been proud to work with Rhonda and Ketut over the last 3 years. A great deal of care was taken to deliver a communications message that was entertaining, relevant and showed respect for our audiences across all media. Hamish & Andy were also a big help in developing loveable advertising characters with identities outside standard advertising formats over this period.

Josh Richards, Managing Partner at Switch Digital added, “We have worked with AAMI and Hamish & Andy for the past three years and have used social media to create rich stories with fans around Rhonda and Ketut that reflect the values of AAMI. We are excited to partner with eBay to support Beyond Blue and give one of the devoted fans out there the opportunity to own a piece of Australia’s favourite love story.”

The auction will launch today and will run for the next 10 days.

Check out the eBay listing at: http://www.ebay.com.au/bling