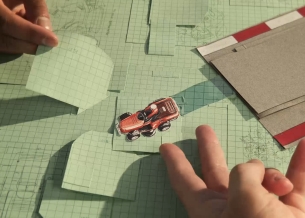 A dynamic, mesmerizing two-minute animated history of the products and innovations from Honda, created by ad agency RPA, directed by the noted stop-motion director PES and given a seamless infusion of visual effects and finishing by VFX Supervisor and Lead Flame Artist Andy Rafael Barrios of A52, has been named Best in Show at the 2016 AICE Awards. Barrios also took the top prize in the competition’s Visual Effects category.

The Best in Show honour was presented along with 32 other AICE Awards at the post production industry’s annual awards show, held on Thursday night, May 12, at Navy Pier in Chicago. During the awards presentation Editor Terry Kaney, formerly of Avenue Edit, was inducted into the AICE’s Hall of Fame in recognition of the body of work he produced during his career and his impact on the Chicago post production industry.

A full list of winners can be found at the AICE Awardsweb site here.

The winners at this year’s show were distributed among a wide array of editors, artists and companies, with several individual talents as well as post production companies scoring multiple winners.

Two-time winning editors included editor Sam Rice-Edwards of The Assembly Rooms, who won in both the Digital Content – Over :90 and the newly-introduced Docu-Style categories, both for work for Mumsnet, and editor Michael Reuter of EditBar, who won in the Comedy and Best of Boston categories for a spot for join.me.

Other notable winners included work from such companies as Beast, which saw editor Brian Lagerhausen win the Best of San Francisco for Fitbit and editor Angelo Valencia win Best of Chicago for Whirlpool; The Colonie, whose editor, Brian Sepanik, won the Dialogue/Monologue/Spoken Word category with a spot for GrubHub while editor Keith Kristinat won the Spec Spot category with a spot for Chevy Trucks; Rooster, which scored winners from editor Paul Proulx in the Public Service category with a piece for Moms Demand Gun Safety in America and from editor Dave De Carlo in the Regional Campaign category with a series of spots for Special Olympics Canada; and Yessian, whose composer Dan Zank won the Original Music category for work for Macy’s while sound designer Jeff Dittenber won the Sound Design category with work for GM.

This year marked the 15th anniversary of the AICE Awards, which has grown into the post production industry’s premier competition for excellence in editorial, color grading, audio mixing, visual effects, sound design and original music composition.

Commenting on the Honda “Paper” Best in Show winner, Editor and Partner Craig Lewandowski of Utopic in Chicago, a member of the AICE Awards Curatorial Committee, “this was one of the entries that rose to the top, and the more we talked about it, the more it kept rising,” he says. “The people who were voting on it were editors, colorists, effects artists and audio mixers, and everyone recognized this as being above and beyond.”

Lewandowski says that “Paper” was not the only craft category finalist in the AICE Awards that was in contention for Best in Show. “To me, that’s encouraging,” he says. “It reflects the larger definition of what constitutes post production today, and that’s what AICE is all about.”

In addition to honouring AICE Hall of Fame Inductee Terry Kaney at the awards presentation, AICE members saluted the first winners of the Camp Kuleshov Grand Prizes for Editing, Audio Mixing and Graphic Design. The association’s popular trailer competition tasks assistants with taking existing films and creating new trailers, opening title sequences and sound design segments that repositions the films as being from a different genre or director.

Last year was the first year all participating AICE chapters held Camp Kuleshov competitions working from the same brief and source films, resulting in national champions in all three categories. This list included Assistant David Rubin of Cutters in Chicago, who was the top winner in Editing; Assistant Michael Marciano of P.S. 260, who won the top prize in Graphic Design; and Assistant Mike Regan of Another Country, who won the top prize in Audio.