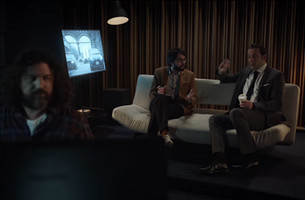 Toyota Marketing Japan has launched the new Vitz with a brilliant short film that has already gone viral in Japan via creative agency Tugboat and director Hideyuki Tanaka.

Tugboat and Tanaka came up with a genius way to subvert the traditional car advert format, taking inspiration from VFX breakdown reels for previous commercials by Australian company, Alt.vfx.
In the film, shot with production company Tohokushinsha, a young director details his idea for an adventurous new Vitz campaign to a senior creative director. As the action he describes plays out on screen, the older, more experienced creative director interjects with a series of more suitable ideas, causing the action to reverse and play out again in a different way.

Using a series of wipes, rewinds, and traditional VFX breakdown techniques, the audience gets to see behind the scenes of the fictional story, playing out in real time before their eyes.
Says Takeshi Takada, executive producer, Alt: "We have worked with Tugboat and Tanaka on several great projects in the past few years, and they have been greatly inspired by the breakdown's we produced to show the work behind the finished ads. This new spot takes that idea and creates something entirely fresh and exciting for the Toyota brand."

Prior to filming, the Alt team created extensive pre-vis, so that Tanaka could work out exactly how to shoot the myriad of sequences and changes that would occur.

Shot on location in Budapest, the new campaign takes the excitement of the traditional heist movie and turns it on its head, bringing the discussions of the key creatives into the story in a tongue-in-cheek way that even allowed Alt's artists to approach the visual effects with a greater degree of flexibility, as VFX supervisor Jason Hawkins testifies.

Says Hawkins: "On one of the shoot days it rained in Budapest, but because of the nature of the ad - in that the scenario was constantly changing and evolving as the creative work out how to tell the story - the idea of it switching from a rainy day to sunny day was written into the final script."

Alt created a number of CG cars to cope with the different scenarios as the Vitz speeds through the crowded streets of Budapest. Using a variety of tools including Nuke, Houdini and Maya, the team created a host of digital set extensions, animations and CG stunts to allow the action to take place.