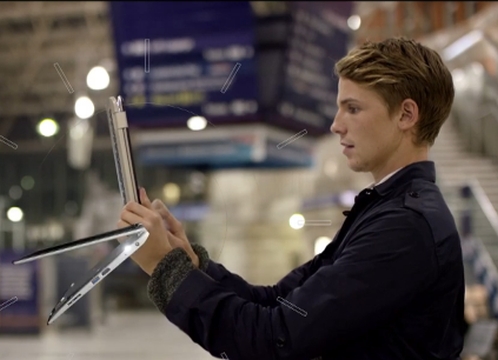 As part of an integrated pan European launch campaign, which will run across digital, print and instore, the branded film, produced by the agency, is the central creative being used to captivate Toshiba’s target audience of millennials, for its convertible laptop with revolving screen.

Conceptualised, created and produced in-house at Alpha Century, the 90 second spot was directed by award-winning James Nunn. Filmed on location in east London to cinematic quality, it sees a love story unfold between a young couple, whilst portraying the versatility of the product and its many different usage modes.

Barnaby Girling, Co-founder at Alpha Century, said: “With increasing need for creative content that can be quickly deployed through the line, we were tasked to produce a film that grasped both the adaptability of Toshiba’s new product and the attention of hard to reach millennial audience who want the maximum benefit for the time, effort and investment they put in. Slightly longer and more narrative than traditional TV spots, which often pass the online audience by, this ‘brief encounter’ is an example of how we are helping clients to think and act more like broadcasters and publishers”.

Speaking of the work, Tarek Boudour, Head of Marketing at Toshiba Northern Europe, said: “The Alpha Century team have collaborated with us throughout the year to devise work which strikes the balance between showcasing our product and engaging with our customer base.

This film is both compelling and concise enough for our audience to watch and enjoy from start to Finish.”

This campaign is the latest piece of work Alpha Century has created for Toshiba since the agency started working with them in September 2013.