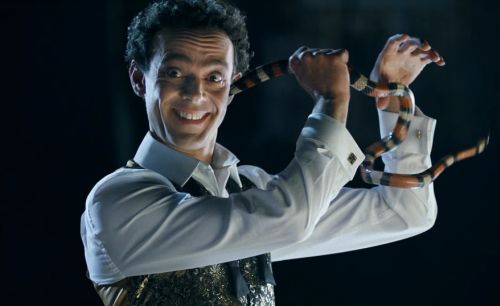 Ogilvy & Mather London today unveils a new integrated, pan-European campaign for leading online travel retailer, Expedia, which uses the flexibility of the ‘Travel Yourself Interesting’ platform to elevate the product to centre stage. Fresh from receiving a prestigious Cannes Lions Creative Effectiveness Award, the overarching campaign has delivered a positive ROI for Expedia and scooped a host of prestigious awards, such as D&AD, The One Show, London International Awards and the Marketing Society Awards for Excellence.

Launching today and running for three months across Europe, the new campaign features three new TVCs that demonstrate the truth that travel makes you a more interesting person. With product messages at their heart, the TV ads are accompanied by targeted online films that aim to interrupt consumers on YouTube, Facebook and VOD and challenge them to move away from the computer screen and 'travel themselves interesting'.

Each of the TV ads shines a spotlight on the underdog who always comes out on top. The first ad shows Illusionist Hugo presenting breathtaking tricks, such as removing his torso from his legs live on stage. But when he looks up from his amazing feat, he sees that Brian, the sound guy, has stolen the crews’ attention away from his tricks with his recent holiday snaps from Hawaii.

The second film shows Esteban the Horse Whisperer performing jaw-dropping acrobatics and tricks with his horse. However he’s shocked to find that his usual audience is more interested in ranch worker Pedro’s trip to New York, to even bat an eyelid at his achievements.

The final ad shows Brad the Stuntman, risking his life and jumping from death defying heights, only to find that Janice the taco lady has become the new star of the show, reeling the film crew in with her travel tales and photos from Paris.

All three executions will run this summer, across countries including the UK, France, and Germany.

Andrew Warner, Snr Marketing Director, commented: “Together we have created a brilliantly subtle new campaign, heroing the product whilst perfectly capturing and elevating the Travel Yourself Interesting idea. We’re confident that the great strategy and creative solution will deliver further positive, tangible business results for Expedia.”

Gerry Human, chief creative officer at Ogilvy & Mather London, commented: “: Expedia's brave decision to steer away from travel marketing clichés already paid dividends for the brand, so now that we're emphasising their awesome products, we expect even better results from the campaign.