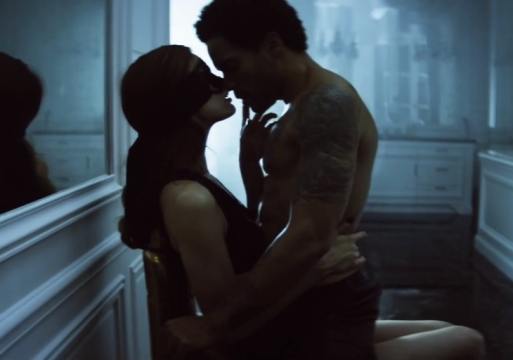 Music icon Lenny Kravitz debuts the much-anticipated music video for “The Chamber,” the lead single off his tenth studio album Strut, due out on September 23.  After teasing fans with two mysterious trailers in late August, the full-length visual makes its official premiere on September 4.  It proves worth every second of the wait, with the grand reveal of the shirtless, muscled rocker confirming that he just gets better with age.

To create the exquisite noir-style film, Kravitz enlisted director Anthony Mandler, whose cinematic scope and high-gloss visual style has made him one of the most sought-after directors of today.  The artistic collaboration proves a perfect fit, as Mandler brilliantly captures the essence of “The Chamber” with a provocative visual that explores two lovers playing a dangerous game.

“The Chamber” opens on Lenny walking the dark streets of Paris, followed by the Nietzsche quote, “The true man wants two things, danger and play. For that reason, he wants woman, as the most dangerous plaything.” A tense orchestral piece overlays the cinematic lead-up to a single gunshot sound shattering the stillness, leading into the funk-fueled bassline.

Well-timed to launch at the beginning of New York Fashion Week, the clip features Dutch model Rianne Ten Haken playing the part of the femme fatale.  High fashion meets highbrow cinema as Mandler weaves a series of moody, sensual vignettes between the ageless Kravitz and the lingerie-clad chanteuse.

Light refracts off the gilt and crystal touches as the opulence of the setting heightens the decadent sexual tension between them. Mandler communicates the sense of being overtaken by a powerful aphrodisiac, as we witness the lovers’ insatiable desire, beauty, and ultimately - madness.

Anthony Mandler is a known for creating the iconic, brand-altering visuals for the biggest names in music, including Rihanna, Eminem, Jay-Z, Beyoncé, Lana del Rey and Taylor Swift.  He is represented by internationally lauded production company Believe Media for commercial work in the US and Europe, and continues to direct music videos under his own banner, Black Hand Cinema.