A Priest and a Psychic Walk Into a New York Bar 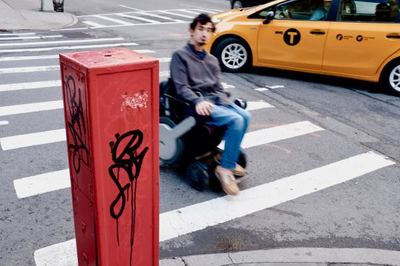 "Be so good they can't ignore you." - Steve Martin

This is one of my favourite pictures of New York. It shows the density of the place. As I am taking a picture of the graffiti, in that split second of focusing, a yellow cab and a man on a motorised wheelchair drifted into frame. A lot happens here. There is a lot of stuff that doesn't make sense. I can imagine life can be overwhelming.

It might explain a strange phenomenon I noticed on the streets. Almost every second block I found a practicing psychic in some tiny store or room.

I had to go see one. I walked in and a lady with an impressive amount of make-up and an accent that could only be described as a car crash between Brooklyn and Budapest told me my life was going to great. Awesome.

Well, I think she did. It was hard to tell.

Predicting the future is a business advertising seems to be obsessed with these days. While I was in New York everybody was talking about Sir Martin Sorrell and what his sudden departure meant. I spoke to a lot of creatives from all sorts of companies who all said things were tough. A few had been retrenched and there was general uncertainty in the air. I guess at times like this you start to look for confidence. Perhaps, that is why I visited the incomprehensible psychic.

The truth is it is at times like this it is good to remember a lesson I have learnt many times and should stop forgetting. I was reminded of it not by a psychic but a priest. Ben Priest (left) founder of DDB Adam&Eve.

I was in a meeting with Ben and a few others and one of the reasons we were there was to thank Ben for all he has achieved and say goodbye.

His lesson was simple. Confidence happens when you define your own success.

When Ben spoke I could hear that confidence. That thing. He spoke about when they started they didn't have a mantra or posters on walls. They all just decided to be an agency that did the best work in the world. And Ben never said this, but I got the feeling he meant work that the people inside DDB Adam&Eve thought was world-class. They created the benchmark and nothing left the building unless you surpassed that level. This creates a common language and goal. It creates unity and resilience. It creates difference. It creates value. It creates confidence.

The question is where does confidence come from?

I have worked at a few great agencies in their prime. What they all have in common is they find a way of defining their own success. Of course, what the client thinks matter. What the public thinks matter. Awards matter. But, what people in the agency think really matters. It is a standard that breeds an internal confidence that gives an agency power like nothing else. When it happens it's like being on a planet that creates its own gravity. It's hard to explain but vital for life to exist.

As a friend said to me the other day, a great agency is where nobody tells you the rules but you always know what they are.

When you work in a space like that, the confidence of the place pushes you forward. You make more stuff and better stuff.

And, if there is a great comfort in being a creative, it is that in the end you get to make something. So, we may as well make it fucking great.

The simple truth is when a great piece of work is made nobody asks any questions.

That is always the answer. This is how you get rid of the noise and the bullshit.

And I don't need a bad New York psychic to tell me that.