BBH Shanghai, A New Life Films, and Fin Design + Effects execute an effects-heavy film for one of China’s oldest breweries 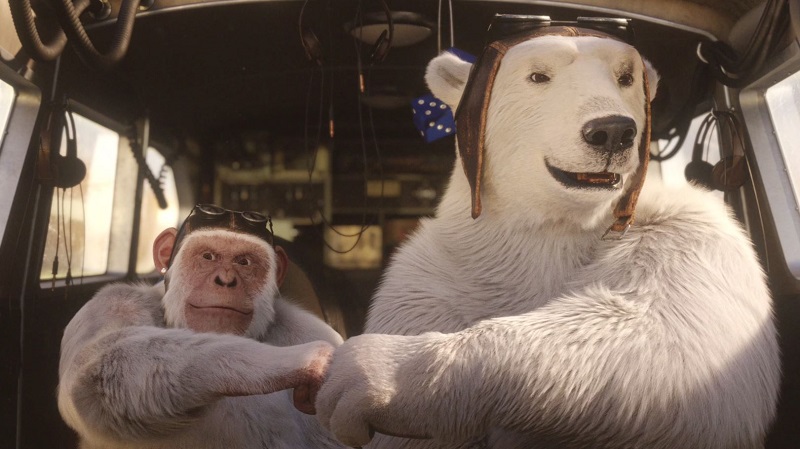 What makes Harbin Beer so smooth? The Chinese brewery reveals its secrets in its latest campaign, ‘Cloud Catcher’ which it teamed up with BBH Shanghai, A New Life Films, and Fin Design + Effects to create. In the ambitious campaign, the film features a complex CG sequence featuring a polar bear and chimp as unlikely pilots.

Directed by Josh Frizell, the film begins with three friends in a bar marvelling at Harbin white beer’s unique taste. The bartender reveals that it’s because of the clouds in the beer. As the trio lean in to examine the liquid, the CG sequence kicks in, transporting us to a landscape of snow-topped mountains. Here, we see a fantastical world where two cuddly companions, a chimp and a polar bear, pilot an aircraft that capture clouds for Harbin – perhaps the secret to the beer’s light and creamy texture.

After collaborating with BBH Shanghai on previous Harbin campaigns, Fin Design + Effects exercised its expertise in character animation to bring the vision to life.

In order to meet the technical demands of ‘Cloud Catcher’, Fin harnessed its unique pipeline and the capabilities of both its Shanghai and Sydney offices. Spanning two months, the highly skilled artists at Fin completed the entirety of the post production on the spot – right through from live action clean-up and enhancements, to building the entire CG world. The team in Sydney completed CG and compositing, while the Shanghai-based team handled the final online on the live action segments.

Executive Producer, Billy Becket, comments: “This is the most complex visual effects work we’ve created for Harbin to date, so it was an exciting challenge for us. As always, it was a pleasure working with Josh. His respect for the post production process and his understanding of how important it is to consider the post early on, was key to the success of a huge CG job like this.”

CG Supervisor Robert Grbevski comments: “Josh had a clear vision to make the animation look as real as possible, so we put a lot of care to make sure we didn’t over-animate. There’s always more scrutiny on the details when the characters aren’t bouncing around the frame, so we really refined the style to make it believable. One challenge we rose to was striking the perfect balance between making the animals look realistic but also giving them characterful expressions.”

CG Compositor Richard Betts comments: “We experimented with several variations of wind strength to nail down the movement of the fur. Pawel Olas and Mike Thomson did a great job with the fur and clouds respectively. Building clouds takes a lot of evolving – and it wasn’t just a normal cloud either, as the agency and director wanted it to capture life and movement. This was a good example of the power of GPU rendering to cut down delivery times. Creating fur in VFX is demanding on processors. Traditionally, it would have become a bottle neck and taken hours to render a frame for each character. But with GPU, we were able to render at a tenth of the speed in some parts.”

‘Cloud Catcher’ is now live online and on TV in China.