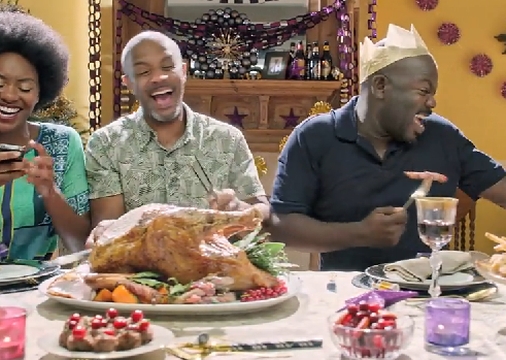 Aldi's christmas ad directed by Another Film Company's Lucy Blakstad features a never ending table of food. Titled ' Everyone's Coming to Us this Christmas' it tracks from one scene to the next through various different households, even stopping at a beach bar and then the Space Station, finishing with Jools Holland and his band playing ' Chestnuts roasting on an open fire'.

The spot was written by McCann Manchester creatives Mick Craven and Gary Delaporte & produced by George Saunders at Another while TV Production was done by McCann's Lucy Moore and Abby Moore.

Blakstad says " I have always enjoyed the freshness and originality of the Aldi advertising. It makes me laugh and there's an honesty and a realness about their creative work which gives Aldi a real character. I don't think it looks like an overly technical job - even though it was - which is exactly what I wanted. It had to have top notch food and natural and spontaneous performances. It's so much easier to achieve this kind of job with everyone not speaking but I love dialogue scripts and I'm passionate about sound so I was happy to weave all the elements together. I naturally hand picked the cast and crew and each person played a key role - even more than normal - in keeping all the different elements 100% perfect and consistent in every take. It was great to work with someone as experienced as DOP Stephen Keith Roach. In one scene we had a constant track, two lines of dialogue from a couple of grumpy octogenarians in onesies, three lighting changes, one burning Christmas pudding and a mince pie that was levitating….all in 4.5 seconds exactly.

Both Jools and his band were fantastic to work with - the newest member joined about 15 years ago and yet they still make each other laugh and just broke into spontaneous jamming sessions between takes just for fun."