A-MNEMONIC Music Helps Oxfam Get 'Dressed By The Kids' 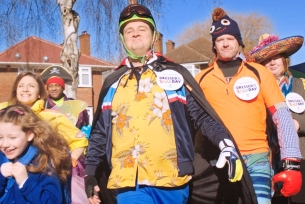 The first ever Dressed by the Kids Day takes place on 29th April. It will see Oxfam challenge the nation to let children choose their wardrobe for the day and to raise sponsorship via text for doing so.

The campaign was created for Oxfam by creative agency WPN Chameleon, and directed by Morgan Hutchins.

Dressed by the Kids Day aims to raise £500,000 to support Oxfam’s fight against poverty.

The event is supported by a number of celebrities including Simon Pegg, Sophie Ellis-Bextor, Jamelia, and Nina Wadia, who will be styled by their children and photographed by celebrity photographer Rankin as part of the campaign.

Tim Hunter, head of fundraising for Oxfam, said: “Transform your look and transform lives. That’s Oxfam’s offer to families with our first-ever Dressed by the Kids Day on April 29th.  Have fun and help raise £500,000 for Oxfam.”

Mums, dads, aunts, uncles and grandparents are all being encouraged to allow the little ones to do their worst in exchange for sponsorship. All funds raise will go towards Oxfam’s fight against poverty. In just 15 years, extreme poverty has been halved. In another 15 years, the charity want to say it has ended for good.

People can sign up here and participants will receive a unique text code to allow their family and friends to sponsor them. The charity is also launching dedicated Dressed by the Kids Day Facebook, Twitter and Instagram accounts to build momentum through encouraging people to post photos and updates with the hashtag #DressedByTheKid.