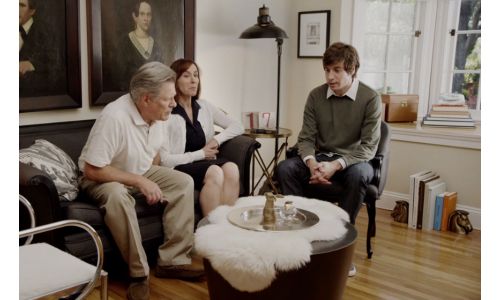 No strangers to provocative storytelling, full-service creative agency MUH-TAY-ZIK | HOF-FER brings you, “Mom and Dad, I Have Something to Tell You,” a comedy-driven short film for fabulously unique recommerce site “PreviouslyOwnedByAGayMan.com.” For interior design aficionados – shoppers and sellers alike – “Previously Owned By A Gay Man” is dedicated to discovering one-of-a-kind furnishings and ensuring these prized possessions find just the right homes.

The video is one of many in the agency’s repertoire of comedy-driven work, including “Gangsters” and “17 Minutes” for Do.com, “Ice Bath” for NBA’s SF Golden State Warriors and Netflix’s “Fireplace For Your Home – Trailer.” Check out “Mom and Dad, I Have Something to Tell You,” here.

MUH-TAY-ZIK | HOF-FER creative team Mike Gallucci and Stevan Chavez tastefully played off the statement “Mom and Dad, I Have Something to Tell You,” in a short video depicting a young man coming out to his parents about his sense of style and innate love of uniquely stylish home furnishings. The video, directed by MUH-TAY-ZIK | HOF-FER co-founder and executive creative director John Matejczyk, is a funny as it is smart, and is the result of a deep collaboration between the two companies.

“This was a great project to work on,” says Matejczyk. “When we were casting for the video, almost all asked if it was for real. We were able to reply that it is very real indeed. The concept of the company is just the right blend of being provocative and respectful. The video we’ve created honors that concept and builds on it with a tasteful edge.”

As an alternative to the unrefined approaches of Craigslist or eBay, Previously Owned By A Gay Man is a carefully curated site filled with only hand-picked coveted pieces. The site makes it easy and safe for anyone with impeccable taste (not just gay men, despite it’s name) to buy and sell beautiful items in an environment that virtually eliminates the hassle of using other online channels.

Title: “Mom and Dad, I have Something to Tell you”