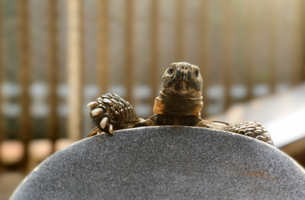 These two new exciting ads for Virgin Money sees the latest collaboration between Andy McLeod and Jim Allen following their award-winning Mulberry: Win Christmas campaign. Featuring a dancing pigeon and a skateboarding tortoise “Pigeon” was the first to be aired and quickly received critical acclaim across multiple publications.
Paul Lloyd, Marketing Director at Virgin Money said, “The strategy with this campaign was to celebrate the Virgin Money difference and to bring it to life in a fresh, fun and surprising way.”
Creatives Danny Hunt & Gavin Torrance wanted to set Virgin Money aside from the boring competition. With the #borndifferent tag the campaign celebrates the brand’s quirks - if regular banks are regular pigeons, Virgin Money are a dancing one.

In order to find out what was achievable with a real bird Jim and Andy embarked on a test shoot with the help of animal consultants, Tooth & Claw. With the footage shot Jim used a simple 'rock and roll' technique whereby the pigeon’s action was repeated to create tail bobs, leg flicks and head shakes, all in time to the beat. This was then retimed to twenty different songs to see what the funniest combinations were. The 1979 hit ‘On my Radio’ by The Selecter came out on top.

The main shoot was split into three parts – location, studio and green screen – and shot on Alexa at 120fps RAW allowing the flexibility to re-time the bird without creating unwanted artefacts. A street was shot just off Columbia road which was then recreated back in the studio by Hollywood production designer David Lee (Star Wars Episode III Return of the Sith, Batman Begins and Eyes Wide Shut).
The team shot the birds in the studio with the help of Tooth & Claw who encouraged the pigeons back and forth with food. Around six pigeons were used on the day and each had its own trademark move, whether wing-flapping, head-bobbing or tail-wagging. Various other movements were also captured to be manipulated later in post.
Certain shots had to be created in green screen. For example when the bird looks at the camera and bobs its head to the beat a close up of the bird's head was spliced onto other studio shots because pigeons don’t move in this way unless walking. In other scenes it was necessary to composite elements from multiple takes to create one move, for example the shimmy from side to side with the wing flap was actually built rom three different takes.
After the shoot Jim and Andy had a huge amount of footage which Jonnie Scarlett tackled by creating libraries for each movement. There were libraries for head bobs, for wing flaps, for direction changes, for everything you could imagine.
Once Jonnie had finished the offline cut Jim loaded into flame from the lo-res MXF files along with the selects. Using the offline files enabled Jim to quickly try out animations and play with options. Once everyone was happy with the rough dance moves, he then recreated the edits using the 2k RAW files and built the final ad. For the most part what you see is what the bird did for real but re-timed to the music track. The final ad was then graded to give it the final moody night time look.
The second of CHI's new Virgin Money ads directed by Andy McLeod (Rattling Stick) and composited by Jim Allen features a skateboarding tortoise and an explosion. But getting a tortoise to kick flip through a skate park is no easy feat.
“It became clear quite early on that tortoises are rubbish at skate-boarding and that some post trickery would be required.” commented Jim Allen.

The main shoot took place at BaySixty6 skate park near Portobello Road with DOP Ben Davis (Kick-Ass, Avengers: age of Ultron). Since it didn’t seem appropriate to push a real tortoise around on a skateboard Asylum model-makers 3D scanned one and created an exact replica with opposable limbs and head. This model was then bolted to a skateboard which was thrown in the air to create different tricks in the midst of professional skaters.

The team then took to the green screen studio with the real tortoise and recreated all the set ups from the shoot. Parts of the real tortoise were comped onto the model tortoise, so when you see him whizz through frame it’s mostly a real tortoise’s head and legs stuck onto the model’s body. For close up shots Jim recreated the skate park in 3D space in Flame with the help of extensive camera data and stills from the shoot and comped the green screen tortoise over the top. This allowed Andy to dictate the pace of background movement.
The films ends with a nod to Spike Jonze’s skate video Fully Flared and sees the tortoise landing a jump off an exploding ramp. This was achieved by firing cork and smoke from an air canon on the green screen set which was then layered up with shots of the model tortoise and also the real tortoise to create the final destructive scene.
view more - Creative