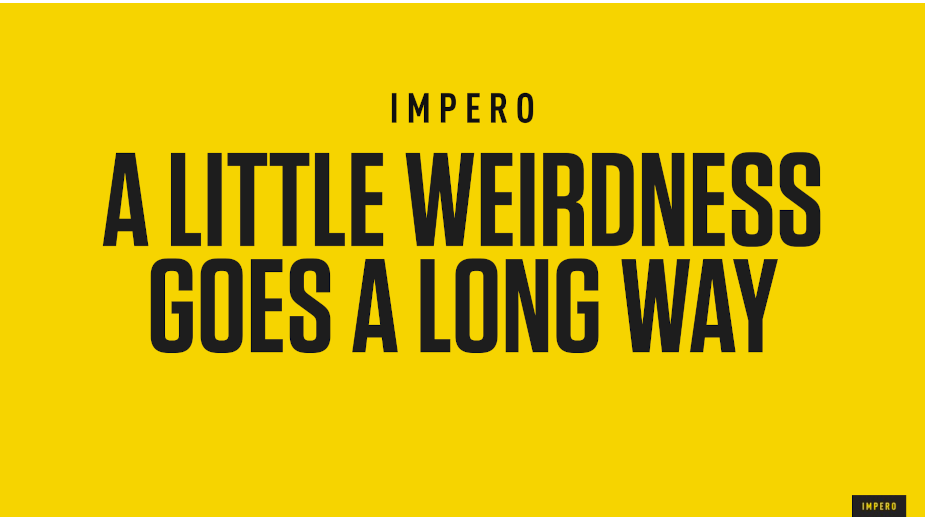 Gen-Z likes weird stuff. This is good news. I like weird stuff too, so we have something in common. My nickname from day one at school was 'Oddy Mills' and for good reason. I was a bit odd. In terms of names, I was lucky - it could have been 'Putteehead' or 'Mutant', like two other boys in my year. But, I digress.

Weird is fun. One of my favourite films is 'Ninja the Protector', a film I found in the bin, and which I’ve watched many times. It’s rubbish (literally, for a short while), but it’s also very weird, and that saves it. The scene where a load of cops pass a photograph around for a weirdly long time is worth it, alone. The film was cheap, the film was rushed, and that special little combo made it very memorable. Most people would still say it’s rubbish though - but bear in mind the director made seven Ninja films in 1986, so it can’t have been easy.

With advertising’s famously shrinking budgets and timelines you’d think we’d have a bit more weird on offer. Sadly, cheap-and-rushed in advertising often results in bland-and-forgettable. Clients often resort to box-ticking and 'Safe', and safe is rarely weird. So if your budget is tight, be brave, not safe. According to a study, Gen-Z have an eight-second filter. Eight seconds where they decide whether you’re going to entertain them, or bore the hell out of them, so safe ain’t gonna cut it. With millennials it was 12 seconds, so we’ve got 33% less time to grab their attention. Best cut straight to the action: a woman riding an emu, with koalas for eyes and a shirt made of bums.

So why is weird so right for this audience? Is it because internet - the purveyor of all kinds of nonsense? Yes, that’s definitely part of it. The internet is like a cage filled with 100 million MMA fighters battling for your attention. Many of them in the nude. That’s devilishly tricky competition. So weird is one way to fight fire with fire. Give them what they want… so probably not a gorgeously shot brand heritage story.

The internet has its own weird aesthetic too, which is raw, fast and interesting. It gives a voice to people who didn’t used to have one in pre-internet days, because you can make things that look a bit crap, and that’s cool, because it looks like it hasn’t been agonised over by an old dude in a Superdry T-Shirt. It’s an aesthetic you see being adopted by brands that traditionally have premium or even luxury looks from Nike to Burberry.

But weird needn’t be niche. Weirdness can be mainstream too - Ikea’s silence the critics for example. Or going back a bit, 'Taste the Rainbow' - a weird series of ads that came out when Gen-Z were still in wee-stained baby-grows and one of the first big brands that took its lead from the internet and put it on TV.

Gen-Z has grown up in this world, so they’re happy with weird - they’ve had a complete, unhindered access to all kinds of bonkers shit for their entire lives. But weird isn’t new. I’d say we all love a bit of weird, and the reason is that, in a way, weird is synonymous with different. So something that was weird a long time ago, is not so weird now. Like the idea of the world being round. Or sitcoms that pushed the boundaries, like the 'Young Ones'.

But then there are the things that still seem weird eons later, like The Goons or the terrifying Kinder Surprise egg man thing from the '80s. So there’s a reason why weird will always be in demand. It’s unforgettable. It's interesting. It’s unexpected. So it forces us to lean in… Not in the Cheryl Sandberg way, but in the 'WTF’s going on here?' kind of way.

So the lesson is, if money and time is tight - be brave, go weird.