Trends and Insight 898 Add to collection

Gramercy Park Studios head of colour, Ben Rogers, on flying the nest, returning home and the life and loves of a colourist 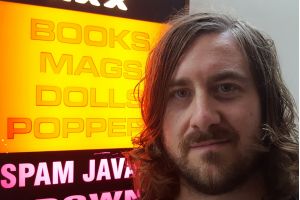 Ben Rogers takes Little Black Book from London to Auckland and back again as we follow his career as a colourist. From bold aspirations as a runner, to the reality of heading up an entire department, Ben describes a career of hard work and constant education.

LBB > How did you first become interested in colour grading?

Ben > I went to art college and have always been a lover of art, film and photography. Once I finished up at college, university didn’t really appeal to me, I went for one day! So I decided to go straight to work. I felt like I needed something that I was truly interested in – and colour grading was a good fit.

I started out as a runner at a company called VTR, and it was here that I had my first encounter with the world of colour grading. I vividly remember watching Tareq Kubaisi, who was a colourist at VTR at the time, and immediately being intrigued. When I saw the way he could manipulate and craft an image to other people’s tastes in front of their eyes, I knew I wanted to pursue grading as a career.

LBB > After VTR, when did you get your first career break?

Ben > I went to work for Framestore in the machine room. This experience was absolutely invaluable, Framestore really has a place in my heart; they are great people and very talented. At first, I was an edit assistant and learnt how to use a Mac and rostrum camera, dub tapes properly, and just generally got to understand the post etiquette; I learnt to keep my mouth shut and my eyes open.

I was very fortunate to be at Framestore when they were doing some amazing jobs. I was an edit assistant on ‘Walking with Dinosaurs’ and even got to do a tiny bit of assist work on some features. But I mainly worked on various commercials, so I was assisting the Flame suite, the Telecine, and 3D when needed.

Back in those days, the machine room at Framestore was slap bang in the middle of the building with all the suites surrounding it, so it was a great place to learn. I was there for nearly 3 years, but I wanted to move up quite quickly.

LBB > When did you start to move into colour grading specifically?

Ben > I was chomping at the bit to get in at Framestore’s Telecine department, but there wasn’t enough space at the time. So in my mid-twenties I went to work for a company called Condor as a Telecine assistant, which was a machine I’d always shown a preference to. I did 18 months at Condor and the experience was exactly what I needed. It was just me and the operator and we had numerous clients. I got to work with some amazing people, and at the start budgets were really strong in the industry. But then there was a recession and suddenly there was more competition for jobs. We were still busy but this was definitely another great learning experience for me.

Towards the end of my time at Condor, I was covering the odd job here and there whenever my boss was away. I got to grade a Levi’s commercial, I also learned how to match-grade, and then I started grading music videos. I was still an assistant but I was getting the opportunities to build up my showreel.

LBB > When would you say you got your first big career break?

Ben> The Head of Production at Condor, Stephen Douglas, had been offered a job as Managing Director of a new post production facility in New Zealand called Oktober Silverscreen. He was after a young up and coming whipper-snapper to become a fully-fledged colourist, so I jumped at the chance.

Working in New Zealand was epic and Oktober Silverscreen was a wonderful place. The company was owned and run by this fantastic director called Geoff Dixon. He’s an amazing man, the ultimate entrepreneur.

I must have been about 26 when I arrived, and although I’d done some work abroad before, this was a big leap. But it was magical down in New Zealand at that time. Lord of the Rings was going on, the America's Cup was happening, plus there were numerous tax benefits and tax rebates driving foreign production, so it was really cheap to shoot.

I also got to work with some amazing directors: Jane Campion, Roger Donaldson and Catherine Bigelow. They won’t remember me as they were one-off projects, but for me it was incredible.

In New Zealand I worked with a brilliant colourist called Andrew Clarkson, and I was quickly thrown into the deep end and was grading large productions straight away. I would take anything I could get my hands on, so I had a really great run down there, but it was definitely not an easy place, I certainly didn’t sit back and wait.

So, after originally saying I’d go to New Zealand for a year, I ended up staying for three. I felt like I had done what I set out to achieve, to become more established, and I was ready to come back to London.

LBB > How did you find it back in London?

Ben > I essentially had to start again. I had no client base so I just had to jump straight back in and do absolutely everything. I went back to Framestore for two-and-a-half years, this time as a colourist rather than an assistant, and they saw that I was hungry. I learnt a lot from people like Matt Turner, Dave Ludlam and also Steffan Perry, who’s the current Head of Colour at Framestore.

It was hard graft but I got to work with some incredibly talented people and I was always learning. After Framestore, I went to work at Glassworks as their Head of Colour, owned by Hector Mcloud, someone I greatly respect. I took over from Tareq, who had initially inspired me to get into colour grading, so I guess it had all come full circle.

Glassworks is an incredibly creative and cool company, the work was second to none, the position took me to Amsterdam and Barcelona and back to London, sometimes weekly. This international experience was jet-set and exciting, but after five-and-a-half years I went to Gramercy Park Studios.

Working at Gramercy Park Studios has been fantastic. It’s really opened my eyes to the agency-side of the industry. I’m pretty sure I was one of the first colourists to make the switch from an independent creative post facility to an agency.

I have quite a different crop of clients now and it’s definitely been another learning curve I’ve had to conquer, but Gramercy Park Studios is on the up and we’re expanding all the time.

LBB > You say you’ve learnt a lot from your peers in the industry. Who would you say you collaborate with the most?

Ben > Obviously numerous directors, but most definitely DOPs as well. They are a very big part of my professional and personal life. I work with them on a day-to-day basis but I also hang out with a lot of them, too. I want to make them as happy as possible and get the most out of their images. Without them, I’m scuppered! Obviously they have a role to play as well; you’ve got to have your shots well lit. It’s a bit of a cliché, but I’m only as good as what I’m given.

LBB > Who would you say is the world’s best colourist right now?

Ben > Jean-Clément Soret is one of the best graders in the world. Easily. He’s influenced everyone in the industry, and he deserves every bit of credit. A lot of his early work, the low-contrast French chic stuff, that was really interesting for me because it was so different to anything else at the time. I remember he was one of the first people to do low-contrast magenta grade for a Cadbury commercial. It was really beautiful. Then there was the Honda Bubbles commercial he did which had the lowest contrast I’d ever seen. It was so milky and yet it had great definition.

Ben > Expansion. GPS is still a young company and we do things differently. We have opened up a virtual grading suite in New York, so I get to do a lot of US work every week via that suite. While I’m sitting here, we Skype and grade in real time. Everyone does it but it feels like a really good progression. We’re also expanding our London facility with additional audio, edit and VFX suites to match our increasing demand. We’re also moving into the APAC region and we’ll be opening up there very soon… Watch this space!

LBB > Finally, what would be your number one tip to any aspiring colourist?