A Horse Walks Into a Bar... You Won't Believe What Happens Next 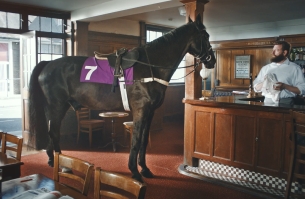 This pair of BETDAQ films from BBH SPORT are classic, famous horse jokes made serious. In them, we see what would actually happen if a horse walked into a bar, and if a barman turned to a horse and started speaking to it.

In the first film the barman responds to a horse walking in through the door by calmly nodding for his regulars to leave and calls the authorities. In the second film the barman asks the horse 'why the long face' but the horse just stares back at him. BBH SPORT has taken a classic joke and created two anti-jokes, the dead-pan awkwardness lending itself to the humour.