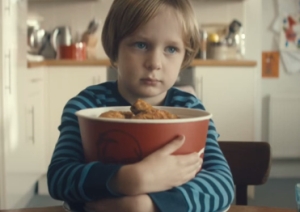 Sharing is at the heart of KFC; from the iconic sharing buckets to the "all-hands-in" experience that comes from sharing KFC chicken. The new campaign communicates the strategy across TV, social, online and reactive Digital Out of Home that pulls in user generated content.

The 60 second TV advert, "The Boy Who Learnt to Share", is aimed at families and is a touching tale of a 6 and a half-year-old boy called Charlie who learns the joy of sharing at Christmas.

Running alongside the TV is a social challenge campaign aimed at young adults, #KFCSharesies, which aims to generate social conversation through shared activities.

Running on Facebook and Twitter from Monday 1st December, #KFCSharesies invites fans to participate in simple challenges for the chance to win amazing Christmas experiences to share with their friends. Prizes include a trip to New York, front row tickets for London Fashion week, a Christmas retreat in Iceland, a gaming session with KSI and the chance to record their own single.