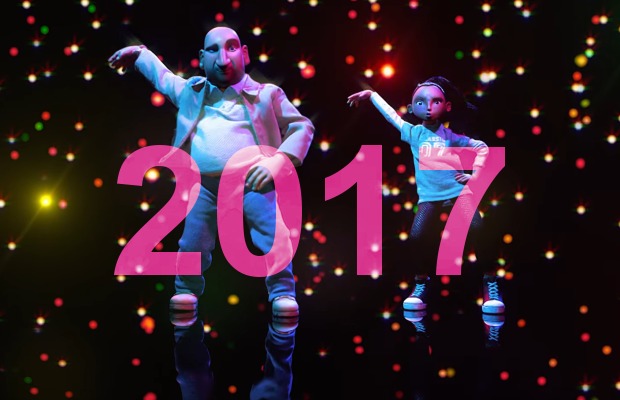 We’ve entered the final stretch of our Decade of Creativity and if 2016 was the year the industry started to wonder if it might do a little good for the world, then 2017 saw it get evangelical. But elsewhere on the Dungeons and Dragons alignment chart of advertising, the chaotic evils and chaotic neutrals were getting opportunistic, poking and prodding platforms, channels and technologies to find loopholes and unexploited grey areas. In fact, it may be that the industry was becoming just as polarised as the real world.

BBC One – The Supporting Act

Sometimes you just need a big old cry. Researchers believe that it lowers the level of stress hormones floating around in your body and that it triggers the release of endorphins and oxytocin. But if you don’t have time for, say, It’s a Wonderful Life or the first 15 minutes of Up, then this touching tale of a father-daughter relationship is my go to. Director Elliot Dear weaves together traditional stop motion animation with CG techniques, building a world that’s packed with well-observed details. But while it’s lovingly made, technique doesn’t overwhelm story and the film culminates in an emotional crescendo that somehow just hits the sweet spot for ugly happy tears.

OK Burger King. This was tactical campaign was so devious that we had to feature it. It may not have been a brand builder – indeed it triggered viewer complaints – but it illustrates this strange lag zone that has emerged as technological change outstrips regulation. It’s ripe with creative opportunities. In this case, Burger King slipped the voice command ‘OK Google’ into its TV ads, triggering smart speakers and Android devices to open up the Wikipedia entry for the Burger King Whopper and start reading from it. The campaign from David Miami was a one-and-done – Google soon updated its smart speaker software to filter out the command, but it generated plenty of PR and debate. It encapsulated the ‘platform hacking’ trend and also hinted at future issues to come – fast forward to 2019 and political advertising is now plagued with a similar gap between what’s allowed and what’s right.

This little bit of yellow plastic turned out to be massive. Devised by Colenso BBDO, it allowed selfie-obsessed pet owners to make their distracted doggies focus for their photographs, by attaching Dentastix to the top of their phones. The clip, given away with packs of Dentastix found its way into the paws, er, hands of a quarter of New Zealand’s dog owners and boosted sales by 24%. Mars Petcare took note and the Dentastix soon found its way into other markets and campaign evolved to include doggy-friendly face filters. And at a time when ad agencies won’t stop talking about their desire to develop products for brands, it was good to see Colenso succeed – and succeed in creating something that did end up being seen and used in the real world.

Confession time: we’ve got a massive crush on this French supermarket ad. Director Katia Lewkowicz channels nouvelle vague for a sweet love story that sees a young Romeo learn to cook properly in order to charm a checkout operator,

In 2015 and 2016, black people were killed by police at over twice the rate of white people in the United States. In August 2017, a neo-Nazi riot in Charlottesville, Virginia culminated in violence. It was against this backdrop of racially-motivated violence and the toxic permissiveness of the Trump presidency that emboldened racists that Procter & Gamble released this two minute film ‘The Talk’. Director Malik Vitthal sensitively showed African American mothers sitting down with their children to detail the injustices that lie ahead of them and techniques to try and keep themselves safe. BBDO New York created the film for My Black is Beautiful, an internal group created in P&G in 2006.

Samsung – We Care for the Girl Child

Cheil India tell the true story of Seema Nagar,  a girl from a small Rajasthan village who became an engineer thanks to Samsung Technical School. It’s a CSR initiative designed to create job opportunities. The emotional tale proved to be a crowd-pleaser – garnering over 81 million views – but it’s also part of a wider strategy that has seen the brand explode in the sizeable Indian market.

A devastatingly simple solution from McCann India and McCann Health that solves a very real problem. In Afghanistan the vaccination completion rate among children is less than 50% because of poorly maintained medical records and vaccination cards. This colour-coded charm bracelet leans into local tradition, whereby parents give their infants bracelets to protect them against evil – but in this case differently coloured beads, added each time the child receives an injection, also create an easily maintained vaccination record.

The advertising industry loves to talk about the truth, about authenticity… though that ‘truth’ has always been noticeably absent when it comes to the reality of the female body and menstruation. According to commercial convention, we all dribble out some blue liquid once a month and feel an odd compulsion to play tennis or go rollerblading. Libresse and their agency AMV BBDO has been challenging that narrative, arguing that it contributes to a culture of shame. In 2017, they launched Blood Normal, a campaign that sought to normalise open conversation about periods, depicting them honestly, cramps and all. The creative questioned the rules that prevented real menstrual blood from being shown on TV – an irony in the age of violent TV shows like Game of Thrones – generating PR and debate, and allowing the brand to challenge its larger competitors.

This was the project that showed just how creative eCommerce could potentially be. The previous year, Xbox had launched Design Lab, a platform that allowed fans to design and buy customised controllers – unfortunately the high premium added onto the price tag meant uptake was low. The ‘Fanchise Model’ encouraged fans to promote and share their designs. They were incentivised by paying them credit for the Xbox store every time their design was bought. Controller sales grew by 350% and the average earned was $95.24 – with one particularly designer earning $1131. It’s a campaign that leveraged gamers’ cold hard greed, making engagement truly worth their while.

Another campaign that pushed and pulled at behavioural levers was Palau Pledge, a project created by four passionate women who wanted to protect the precious natural environment of the island of Palau. Host/Havas in Sydney came on board to help grow the project. Visitors to the island had to sign a promise not to destroy the environment as part of the entry visa process – so it was a scheme that involved a fair amount of political wrangling too. However, since launch other countries have created similar schemes and the founders were awarded €323,280 by Cannes Lions as winners of the inaugural Sustainable Development Lions Grand Prix.