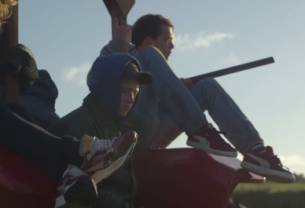 Luke Jacobs has directed ‘They Don’t Know’, a promo for London based production trio Disciples.  The DoP of Rudimental’s multi-award winning ‘Not Giving In’ has created an enthralling visual accompaniment for Disciples’ first official video, with post-production for the narrative-driven film being carried out by Gramercy Park Studios.

The dark film follows a duo of shotgun-wielding teens who, having stumbled across a crime-scene, come to the rescue of a young female, which plunges the trio into a dangerous game of cat and mouse.

Set across a picturesque coastal environment, the mysterious film revolves around the illicit content of a backpack taken from the criminals.

Gramercy Park Studios’ Colourist Ben Rogers and VFX Artist Andrew Curtis both carried out post work on ‘They Don’t Know’. The film was produced by Like an EGG Productions’ Keiran McGaughney, who has also recently worked with Gramercy Park Studios on ‘Circles’, Josh Cole’s I See MONSTAS promo.

Colourist Ben Rogers comments “The promo was shot on a mixture of camera formats - 5D, 7D, GoPro, Red Epic at 4K – and we had to bring all the different looks from each camera together to take full advantage of the beautiful surroundings and allow the story to unfold gracefully. Heightening the project with a variety of film curves, combined with a rich natural contrast, provided the final look we wanted.”

VFX Artists Andrew Curtis adds “It was great to work with Luke on this stylised piece. There are some beautiful shots which were enhanced by reframing and additional clean-up. Luke's attention to detail ensured that the promo was finished to the highest quality.”