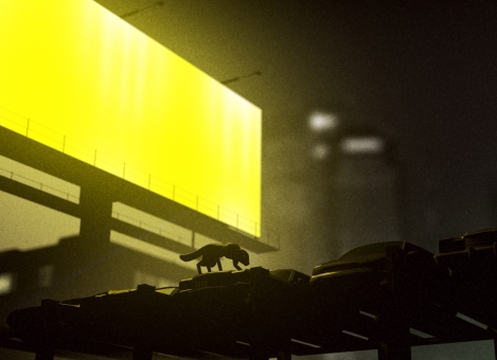 A fully 3d animated short, it gave Schiedon the opportunity to work closely with the musician and his creative collaborator, A Hidden Place, imagining what kind of world their creature would inhabit. PostPanic and London based Young Turks had been looking for an excuse to creatively collaborate with each other and Schiedon's particular sense of story-telling within animation, appealed to Young Turks artist, SBTRKT. 'NEW DORP. NEW YORK.' is the 1st release from SBTRKT's new album 'Wonder Where We Land' and features Vampire Weekend frontman Ezra Koenig paying cryptic lyrical tribute to the Big Apple.

Schiedon on working with SBTRKT, said: "SBTRKT is simply one of the most interesting artists I know of. I can try and fail to describe what it is about the music that is appealing and relevant to the video I made. But it really comes down to a feeling about something that, in the case of this track, exists somewhere in a odd parallel world. The music brings up that type of imagery. And then the rest of the story is to try to get that feeling across through a medium that requires very concrete, technical and skillful actions. That might be another similarity to the way SBTRKT's work comes into existence."