A Car With a Heartbeat? M&C Saatchi Know How to Get Pulses Racing In This Latest Campaign for Lexus 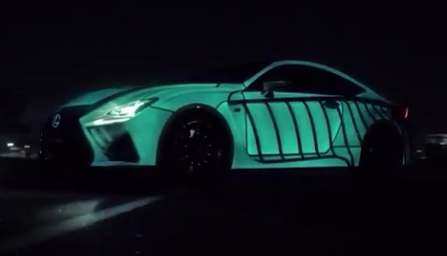 Lexus aimed to showcase the experience of driving its high-performance F line of vehicles. These vehicles are built from the ground up to excite any driver in any environment, demonstrating that Lexus vehicles can conquer the world’s toughest racetracks but still deliver a visceral thrill on the road.

For Lexus, motorsport is much more than pushing the limits of power, or speed, or specification. They are all simply ingredients to achieve one goal: making the driver feel the thrill of the road. So an RC F V8 Coupe was taken aside and given a very special treatment.

In a R&D collaboration between Lexus, M&C Saatchi and the agency’s innovation hub Tricky Jigsaw, the car was fitted with breakthrough technology that enabled it to react to the driver’s heartbeat in a uniquely visual way.

The driver’s pulse lights up the car in a compelling demonstration of the impact human and machine can have on each other.

The magic happens via bespoke-built high-tech sensors that detect the driver’s heartbeat and then synch it to illuminate especially-concocted electroluminescent paint applied to the car’s exterior panelling.

The campaign goes live today with especially built digital executions that link to an M&C Saatchi-created film http://thisisheartracing.com.au/ on Lexus.com.au/performance and rolls out across a suite of premium mainstream mastheads and business, tech and men’s lifestyle sites, both online and in print.

In another first, the print executions will feature just-released visual recognition capability from Shazam that will bring the ads to dynamic, interactive life for readers via their mobile phones.

Lexus Australia CEO Sean Hanley said: “The Lexus Heartbeat Car is a stunning testament to the strength of our collaboration with creative partners M&C Saatchi.”

“It perfectly embodies the New Lexus ethos that is innovative, bold, dynamic and dynamic,” he said.
“Above all, it reaffirms that we make high-performance vehicles, exemplified by the ‘F’ line of which this RC F is a one-off that will truly get hearts racing.”

M&C Saatchi Australia Group CEO Jaimes Leggett said: “It has been a privilege to help Lexus bring its vision to life in such a compelling way.”

“They are fantastic partners. Pushing the envelope is their default position and their drive and bravery to explore what’s possible are inspiring,” he said.

“We are grateful to have had this opportunity to deploy a number of our Group’s capabilities: innovation and NPD, creative, strategy, content, media and PR.”

Within four months the agency had relaunched the brand with the “This is the New Lexus” repositioning to trigger a reappraisal of the luxury marque by new audiences.

In January it built on the positioning with a campaign to launch the NX Crossover that featured the world’s smartest billboards.

Colourist: Ben Eagleton at B Colour