Trends and Insight 686 Add to collection 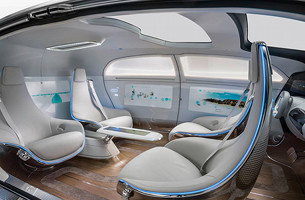 Innovation and new technology are the darlings of adland right now – sometimes so much so that it can prove difficult wade through the clutter and pick out the real gems. So which pieces of tech should we be most excited about and which are the ones that could prove most impactful on this industry? LBB’s Addison Capper caught up with Creative Technologists from around the globe to get their view.

“There’s this idea that Technology *wants* something (Kevin Kelly: What Technology Wants), and if you ask me – it wants to get inside you. Think about it; we’ve already got contact lens technology that is self-powered, or can show basic information overlay. If you then consider the light-field technology powering Microsoft’s HoloLens and MagicLeap (a technology that fools your brain into thinking that yes, that *is* an elephant in the room) you can see the potential to completely change society, and so, how we experience advertising.”

“The ad industry is in surprisingly good health. It turns out, start-ups need advertising to turn a profit. One piece of technology that I think could have a big impact is block-chain DRM (digital rights management) that will allow content creators (punters, much more so than brands) to earn money from the distribution and consumption of their work. Imagine IP is hard-coded in to content, and owners get micro-payments for every view or copy. Also, one other thing I think will be impactful is VRM (vendor relationship management). Your personal data is your own asset, to be traded for goods and services. Cookies are history. Fun times ahead!”

“The opportunities in immersive interactive storytelling are changing how we tell stories - and that’s at the heart of, or should be, all digital advertising. The development of 3D in the context of real-time rendering is probably the biggest opportunity for the ad industry at the moment. For browsers this is the development of WebGL; and for app development and VR the tool of choice is game engines such as Unity.”

“AI/cognitive computing paired with data will make us very powerful, allowing us to process huge volumes of data and turn it into smart data by gathering insights at super human speed. IBM Watson and neuronme.com are great examples of this.”

“Wearables (incl. Apple Watch) bring an opportunity for the industry to use data, learn from interactions and build services and platforms for their users. Services that add genuine value will form stronger relationships with brands. This will force budgets to move from traditional advertising into service design and development.”

“The meteoric rise of interest in VR is already having an impact. The games industry (that pioneer of consumer tech) is already producing content for the VR revolution and others are sure to follow. We are seeing more and more companies looking to exploit the immersive storytelling potential of virtual reality devices such as Google Cardboard and Oculus Rift. Currently most VR campaigns are installation or event based but the money being poured into this tech by the likes of Facebook, Microsoft and Samsung means VR devices are going to be on lots of Christmas lists this year which in turn will pave the way for much wider reach.”

“Whatever Apple is cooking up for the living room. The new Apple TV is going to rewrite the user experience for TV, and give advertisers better targeting capabilities than ever before. And it might yet open up a space for brands to develop interactive experiences – including games and data services – with richer potential than your phone.”

“I hate to say it, but maybe the Apple Watch. Apple obviously isn’t the first to market with this, as there’s been Android versions out for some time and I had a Pebble back in 2013. But Apple’s smart watch seems to be getting more attention than the others. It will be interesting to see if people really adopt wearables of this nature. If people do, I think brands are going to want to get into that space immediately.

But I would expect to see this short lived, as I imagine that similar to branded mobile applications, branded smart phone apps will mostly flop and be seen as a novelty or just excessive marketing. Apps with more daily purpose – such as Nike’s running app or Starbuck’s rewards app – those will probably have more usage as there’s an actual service they’re providing. But novelty campaign smartphone apps will probably get old fast.”

“Seem like a stretch? A concept similar to the Mercedes F015 will change the way we travel long and short distances, becoming a complete user experience. A fully-connected vehicle with AR, video screens that cover the interior, swivel chairs so you can add a human element to your interactions, and not having to be engaged physically with driving the vehicle will allow people to free up time to interact with the system and extend experiences. According to a study done by the Harvard Health Watch, an average American spends 101 minutes per day driving. Commuters will now be free to consume even more forms of media/data in a controlled environment whether for entertainment or educational purposes. Theoretically, a trickle-down effect should impact the ad industry with more spectators available for extended periods of time.”