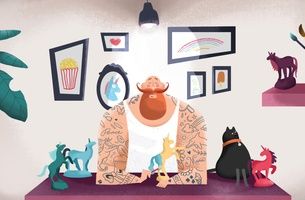 On behalf of Adformatie, the Dutch advertising trade magazine, Nils Adriaans approached Ambassadors to team up for a creative piece on John Mescall’s eight inspirational sources. It started off as a simple interview between Adriaans and Mescall, who is the creative director for ‘Dumb ways to die’, but accelerated into a printed 8-page section and animated short film to accompany the story.

Adriaans said: “First of all, John was really cooperative – a big thanks goes out to McCann New York (where Mescall works as Global Executive Creative Director and Global Creative Council President for McCann Worldgroup). Second of all Ambassadors took it home big time, both creatively and production wise. The whole project felt like a gift."

Mescall’s story came to life using a voice-over and there is no better person than the man himself to record his own words. His calm, Australian accent becomes a strong inspiration and sets the tone for the rest of the project.

“From that moment on it became a team effort," says Vincent Lammers, head of design & animation. "Using up every spare moment to design and animate every aspect of the short film. All designers were given complete freedom to experiment based on the given interview script, which resulted in almost 20 different approaches. So for every chapter we adopted a specific style using either paper animations, 3D animations, pencil animations and a lot more making it a showcase of all our in-house design talent.”

Illustrator Ewoudt Boonstra, who has worked with Ambassadors several times before, also joined forces with the creative team and contributed an animated piece.

A guiding colour palette, John Mescall’s voice and music by Joep Meijburg, composer & sound designer, form a strong line through all the chapters.

As Meijburg puts it, “Mescall’s voice was a strong inspiration, especially his calmness and laid-back. The rhythm gave me an instant feeling that I wanted to bring across. The music needed a breezy vibe to support the visuals and the voice-over.”

“In a very early stage I got so excited because the music was hitting the vibe I wanted to create," says Meijburg. "So I called up Vincent and we started high five-ing.”

For both – Lammers and Meijburg – the creative freedom in this project was the cherry on the cake, keeping the spontaneity in every second. The music and visuals came together in a beautiful way bringing Mescall’s words to life in print and in animation.

Adriaans concludes: “I truly hope we can do international inspirational collaborations like this more often.”