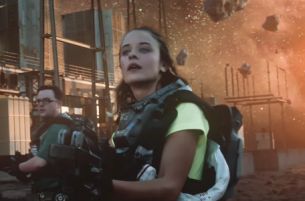 Ahead of Call of Duty: Infinite Warfare’s release on November 4, Activision and 72andSunny have released an integrated campaign that includes a live action trailer starring Michael Phelps and Danny McBride.

With the U.S. Presidential Election in full swing, the U.K. leaving the European Union and headlines around the globe frustrating everyone, the new Call of Duty: Infinite Warfare live action trailer entitled, “Screw It, Let’s Go To Space” taps into that shared cultural angst and positions space as a much-needed escape from 2016. From businessmen to newscasters to delivery drivers to Olympic swimmer and 23-time gold medal winner Michael Phelps (who gets his kill stolen by “Vice-Principals” and “Eastbound and Down” star Danny McBride), everyone’s up there getting their frustrations out. A Call of Duty fan in real life, Phelps recently logged over 500 Call of Duty games in a two week span while training for his record-setting Olympics performance in Rio.

Call of Duty: Infinite Warfare will launch worldwide Friday, November 4, immersing players in a war story that, for the first time in franchise history, extends beyond the reaches of Earth into the vast expanse of our solar system.