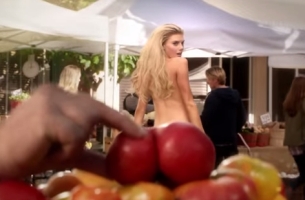 Carl’s Jr. has launched its new Super Bowl spot, airing in the Big Game on Feb. 1st and live online now. In the commercial ‘Au Naturel,’ Carl’s Jr. and swimsuit model Charlotte McKinney are stripping down and going all-natural for the first time ever.

Within the ad, which supports the launch of the All-Natural Burger, McKinney saunters through a bustling farmers market, seemingly naked and hidden by strategically placed produce. After a series of carefully-crafted shots with a variety of sensual fruits, McKinney comes to the center of the frame to reveal that there’s nothing between her and her… all-natural charbroiled burger. The spot nods to the classic scene in Austin Powers 2, where Mike Myers and Elizabeth Hurley cover themselves with everyday items.