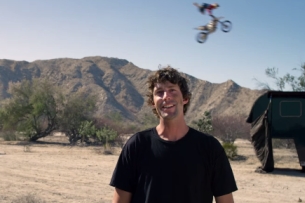 Even when you’re a three-time gold medalist at the X Games, a national champion motocross and professional stunt rider, you ain’t seen nothin’ like the action in Skylanders SuperChargers.

To showcase the abilities of the new SuperCharger equipment, 72andSunny tapped real-life motocross stuntman, Travis Pastrana, to test his moves against those of the Skylanders characters. In “Buckle Up,” even gravity-defying stunts can’t compete with the tricks Spitfire and the Skylanders are able to pull off with their new vehicles. “Buckle Up” features live action stunts and helicopter shots, including footage captured by mobile cameras attached to the vehicles and stuntmen. The tricks performed by Skylanders were assisted by CGI naturally, as the SuperCharger vehicles are quite literally, out of this world.