72andSunny Amsterdam & Google Celebrate the Fall of the Berlin Wall 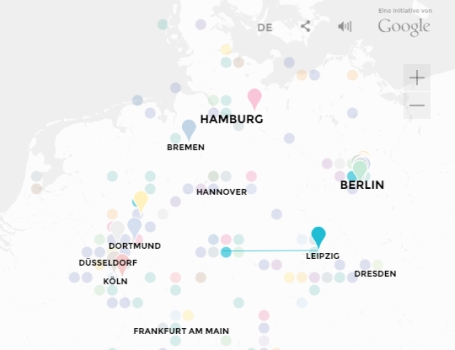 Marking the 25th anniversary of the Fall of the Berlin Wall, 72andSunny has created an interactive platform to create a portrait of a new generation presenting 25 extraordinary personalities who were born around 1989 and are making an impact. To spark a conversation, the platform invites the audience to participate and comment on these values of a new #Deutschland25.

The platform, #Deutschland25, created by 72andSunny Amsterdam, is launching globally on the 9th November - the 25th anniversary. Commemorating the anniversary of the fall of the wall, it invites a global audience to be inspired by what’s happening in Germany today and join in their conversations.

The 25 stories will be published through interviews with well-known journalists on the website as well as full-page ads in German newspapers. Accompanying some of the stories are films, produced by director and winner of the German Film Prize in 2008 Bettina Blümner.

Each story is displayed on a map of Germany in different colours to visualise areas of interest of the people in cities and regions. In doing so, the map provides an interactive portrait of a new generation in Germany today - 25 years after the fall of the Wall.

Among the stories is 25-year-old Ninon from Berlin. A year ago she founded, with three fellow students, the project "cook outside the box". The project promotes a cultural exchange, bringing together refugees and locals to take part in the common activity of taking part in cooking workshops. Planning for the future, Ninon and her team have put together a cookbook which they aim to translate into other languages and to sell abroad, as well as offering cooking classes throughout Germany.

Another tells the story of Thekla and Pola, two young women from Hamburg who two years ago founded a ‘library for dresses’, in which customers can borrow clothes for a monthly fee. The concept aims to change the way clothes are consumed, moving away from over-consumption and over-production towards a new appreciation of things.

According to a study by the Federal Statistical Office, around 20 percent of households in Germany have no computer and no access to the Internet. Led by 24-year-old Leo and his team, this is where the project "Digital Helpers" came from. The project aims to distribute computers to people in need. Founded in Munich, the social start-up organised the redistribution of old computers that might otherwise end up in the garbage. For Leo the aim is clear: "Access to the Internet must definitely be a fundamental right and possible for everyone in Germany."

Frida Elisson, Consumer Marketing Manager, Google: "All these young Germans stand for freedom, sustainability, tolerance and generally a joy to change. These values are shared by Google also. We want the stories told by 'Generation Fall of the Wall', accessible online, to initiate a discussion. Anyone can participate and help shape our interactive portrait of today's Germany."

Bettina Blümner, Director: "The platform showcases an interesting snapshot, every single story in itself is exciting and has great creative potential. The stories tell of a generation who have so many great ideas which have already been put into action."

Gregg Clampffer, CD at 72andSunny Amsterdam says “We were thrilled to be working with Google on this project. The interactive portraits seek to celebrate the compelling stories and the cultural values of a generation of young Germans who have grown up after the Berlin Wall fell.”