72andSunny Acquires All The Memes For This New Anti-smoking Spot 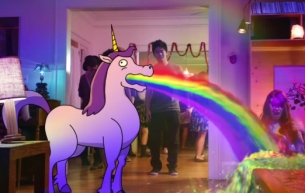 72andSunny has launched the latest piece of work for anti-smoking organization truth, and it's absolutely filled to the brim with memes. The spot reveals the deceit and danger behind social smoking, hookah and little cigars, with some help from Overly Attached Girlfriend, ErmahGerd Girl, Ducreux and more.

Since its first work last year, truth and 72andSunny have seen a 1% decline in teen smoking, down from 9% to 8%.  But as many as one in four teens today say they think social smoking - also called light or intermittent smoking - poses no risk at all to their health. And that’s just not true.

“It’s a Trap” is a continuation of the Finish It campaign kicked off by 72andSunny and truth. The campaign empowers smokers and nonsmokers alike to make this the generation that ends tobacco use by giving teens the facts about tobacco, sharing progress in the fight against the tobacco epidemic and providing tools teens can use to make the fight against Big Tobacco their own. The ad follows “Finishers 2.0” from 72andSunny and truth, which premiered on the Teen Choice Awards earlier this month to introduce the dangerous realities of alternative forms of smoking.