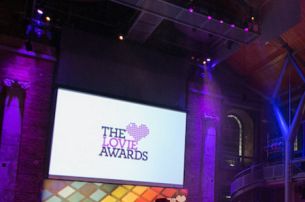 New Award and Winners unveiled: The Lovie Creators for Change

In a surprise announcement, The Lovie Awards celebrated Rose Ellen Dix and Rosie Spaughton as the inaugural winners of a new award developed in partnership with YouTube: The Lovie Creators for Change Award. As part of the recently-launched YouTube Creators for Change programme, the award honours creators whose work exemplifies the programme mission: to use the global power of online video to combat misunderstanding, fear and intolerance on the Internet, and to celebrate hope and positivity for audiences everywhere. Humza Arshad, one of six YouTube Creators for Change Ambassadors, and writer and creator of the popular web series Diary of a Badman, presented the award.

Rose and Rosie’s positive content and open dialogue around LGBT issues on their YouTube channel demonstrates that honesty and open-mindedness are some of the most important ingredients in spreading a message of equality. With a comedic bent to sharing everything about their life together, Rose and Rosie use a fearless approach in discussing what can be touchy subjects ranging from sexuality to discrimination. Their use of video and the social web to transparently promote equality and LGBT life through transparency, keeps audiences endlessly engaged and in conversation.

Highlights from this year’s Lovie Awards

BBC's Technology Correspondent Rory Cellan-Jones presented the Lovie Lifetime Achievement Award to Yann LeCun for his work as a pioneer in the creation of neural networks. LeCun’s contributions to the science of machine learning, mobile robotics and computational neuroscience among other learned fields, is legendary. As a founder of Neural Nets, LeCun applied biological methods of perception to computer processors. He is currently continuing his forward-thinking work as the Head of Artificial Intelligence at Facebook.

Annie Lennox was honoured with The Lovie Person of the Year Award in recognition of her expert and relentless use of social media to leverage her platform and outreach to create a better world for others. The award was presented and accepted on Lennox’s behalf by Game of Thrones actress, Gwendoline Christie. Annie’s efforts abound, from working with organisations such as Oxfam, Amnesty International, Comic Relief, Greenpeace, 46664, UNAIDS and The British Red Cross, among countless others, as well as promoting gender empowerment through the organisation she founded, The Circle.ngo, for which Gwendoline Christie supports as an Ambassador.

Visionary director Romain Gavras was honoured as Lovie Artist of the Year in recognition of his embrace of digital culture and the Internet as the venue for creating and sharing experimental art and original video. Following music videos for artists like Kanye West and M.I.A., Gavras’ latest video for Jamie XX’s “Gosh,” which debuted online, cements him into the canon of modern artists who are fearlessly creating work for a global online audience with unabashed vision.

Patricia Bright was awarded with the Lovie Internet Video Person of the Year Award, presented by Victoria Stoyanova, Community Strategist and London Host of Creative Mornings. As someone with a homegrown YouTube channel who has crossed into mainstream media and online culture, Patricia’s open-minded and honest voice rings true in videos cataloguing the path from student to successful working married mother. Patricia inspires and gives a voice to younger women everywhere who can find unlimited positivity, comfort and mentorship in her presence across the social web.

The Süddeutsche Zeitung was honoured with the Lovie Be Greater with Data Award for the technology behind publishing the Panama Papers story, the result of the largest data leak in history. The award was presented by Mar Cabra, head of the Data & Research Unit at ICIJ (The International Consortium of Investigative Journalists), to Süddeutsche Zeitung data journalist and Panama Papers team member, Hannes Munzinger. SZ organised a global team of reporters in partnership with ICIJ, to collaboratively parse, annotate and research the 11.5 million files through a customised online network where journalists could safely communicate.

Cheil Germany accepted the first-ever Lovie Agency of the Year award. With 2 Golds,1 Silver, 3 People’s Lovie Awards and 5 works Shortlisted, including #BeFearless, VR The Future, Innovating Evolution, and Lufthansa City Navigator, Cheil Germany earned more Lovie Awards and Shortlist nods across all categories than any other agency this year.

Joining winners in celebration were members of the International Academy of Digital Arts & Sciences, who serve as the judging body of The Lovie Awards and its’ international sister The Webby Awards, including Jury Chairman Nicolas Roope, McCann Worldgroup Germany’s Chief Creative Officer Elke Klinkhammer, Wieden + Kennedy’s Executive Creative Director Iain Tait, and Tim Malbon, Founder of Made by Many. All Lovie Awards Winners in attendance delivered a trademark “Declaration of Lovie” acceptance speech, brief speeches using the word “love” to share why they love the Internet.

Nicolas Roope, IADAS Jury Chairman for The Lovie Awards, said:  “Once again the Lovies have brought together some of Europe’s brightest minds in the digital and creative community to celebrate the positive impact that the Internet can have in the World. I’m excited to see how the new connections created among such a diverse and interesting group of people will fuel great work to come.”