At LBB, we’ve compiled our list of the key themes which stood out to some of the juries at Cannes Lions 2021 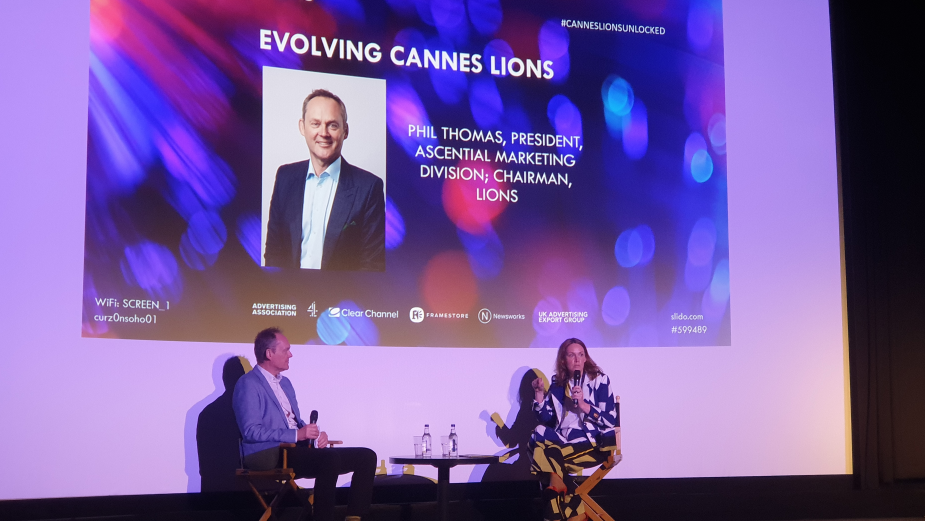 Cannes Lions Unlocked, hosted by the Advertising Association, took place in London’s Curzon Soho last week and was broadcast across the world. The event consisted of a talk with Cannes Lions chairman, Phil Thomas and presentations from Contagious’ Alex Jenkins and the AMV BBDO ‘Womb Stories’ executive creative directors.

These conversations from some of the prominent voices in the industry, highlighted some of the key themes from the 2021 festival that were identified by some of the Lions jurors.

Tangible Authenticity combines the idea of ‘Tangible value creation’ and ‘Authentic problem solving’. Some of the most effective campaigns at this year’s awards were praised for their ability to ‘lift the veil’ and show a product - and its results - in reality.

Although there were also campaigns which were rewarded for their ability to give people a much-needed break from reality, several jurors were highlighted as praising campaigns that solve problems in reality and show, what Alex Jenkins termed, ‘the unvarnished story’ behind them.

When interviewed by Contagious, Maurice Riley, chief data officer at Digitas and president of the Cannes Lions creative data jury said: “When we were looking at our judging criteria, it was all about end-to-end tangible value creation.”

This idea of authenticity and transparency when solving problems was very prevalent in Publicis Conseil’s Renault Zoe campaign, which won a Grand Prix in the outdoor category.

A phrase that came up time and time again at Cannes Lion Unlocked was ‘inclusivity for impact’. As Alex Jenkins explained: “The shift in adland seems to be a shift less towards nebulous issues: racial issues, gender inequality, diversity, and more towards solving tightly defined problems that are also specific to the brand and company itself.”

This theme embodies the power of recognising groups of people, reflecting their reality and solving specific problems that relate not only to issues of inclusion, but problems that are directly linked to the company and its product.

This isn’t to say that all companies must be social enterprises and must focus on driving industry changes in inclusivity to perform well at the festival. However there has been a growing trend of ‘meaningful marketing’ that has resonated with some of the jury members this year.

TBWA\London used ‘inclusivity for impact’ in their Health & Wellness Grand Prix winning ‘#stealourstaff’ campaign for BECO. The specific and relevant issue of 52% of disabled people being excluded from work was taken on, through a captioned video advert and product packaging that had braille and displayed BECO’s disabled staff members’ CVs.

Social responsibility was a popular theme at the 2021 festival, as several jurors identified a trend of companies moving past using a one-off campaign to promote a product, instead creating sustainable, long-term campaigns that can deliver results over an extended period of time.

These ‘long haul’ campaigns enact quickly to solve an initial problem, but then reap lasting rewards and effects through secondary benefits. “We have to get away from this one-off campaign mindset and look to create ideas that can last and we can invest in, that can drive impact over time.” Says Andrew Keller, VP and global creative director, Facebook and Cannes Lions Mobile Jury president.

Heineken’s shutter adverts initiative, which won an outdoor Grand Prix, had an initial benefit of physical advertising. It also quickly solved a problem, giving bars an income after they were closed by the pandemic. Heineken used their advertising budget to campaign on shop-front shutters, encouraging repeat custom to the bars where their products are stocked.

Innovative projects not only engage an audience but can create a buzz that has a company trending immediately. This kind of response is rare and something that only works if you strike the right balance between a company’s tone of voice, a concept that hasn’t been seen and an audience that spikes in curiosity. This was apparent with Reddit’s hijacking of the 2021 Super Bowl.

Reddit lacked the budget for a full showcase, only being able to afford five seconds at the Super Bowl - but boy did they make those five seconds last. “They made it look like they had disrupted the Super Bowl. It’s that shock and intrigue that drove the results.” - Alex Jenkins, Contagious. It forced people to pause the show, run to Twitter and discuss what they had seen.

Innovation also features with the products being advertised. Degree won the Grand Prix in Innovation for their inclusive deodorant which catered to individuals with disabilities. Their campaign created alongside Wunderman Thompason involved trial and error as well as a commitment to support those who are underrepresented and may find challenges within everyday products.

Globalisation within the industry is not only limited to the visible representation on screen, but also in the partnerships within each campaign. Companies are no longer taking sole creativity over a piece of work, but inviting multiple organisations to collaborate with them.

Numerous shortlisted and winning adverts at Cannes Lions this year featured creatives, based in many different companies around the world, collaborating on campaigns. “The number of shortlisted entries with more than one company credited has quadrupled in the last 10 years” - Phil Thomas, president of Ascential Marketing Division and chairman, Cannes Lions.

This year’s Best in Show came from AMV BBDO with Womb Stories. While the campaign focused on female illustrators, producers and creatives, the talented creators were global in their locations. The result was a campaign that housed stories from around the world and will globally support women with endometriosis diagnosis.

Marketing no longer follows a particular convention and this is apparent within the multi-platform nature of advertising. This year at Cannes Lions, a memorable feature was Burger King’s use of the gaming platform FIFA, to promote not only its products but also the football team of Stevenage.

Reflecting on the winners this year, Phil Thomas explains, “The decision about the platform was almost made before the idea itself.” Social media outlets such as Instagram, TikTok and now even games such as FIFA feature heavily due to savvy targeting and the accessibility of the adverts through social media sharing.

Using platform-targeted advertising, “You’re not just targeting and focusing them [the target audience], you’re arming them…giving them the freedom to augment the campaign, to mix it up, to amplify it in their own ways.” - Reed Collins, president of Direct Jury, chief creative officer, Ogilvy APAC.

The key to the most successful campaigns are using these platforms to hold the audience’s attention. Stevenage’s FIFA engagement levels, their football t-shirt sales and the subsequent social media buzz showed how successful the campaign ultimately was.