Where's their head at? On putting faces on monkeys, getting glammed up and joining Rattling Stick 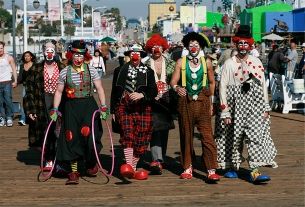 25 years and going strong as one of the most irrepressibly creative forces in the industry, Scandi directing collective Traktor may well be the Peter Pans of the advertising world. Their work is ever fresh, ever funny. They first got together in 1990 and to this day they’re described in the press as ‘enigmatic’, such is their power to surprise and delight with each new project. They may have two Cannes Grand Prix, an Emmy and countless other adland gongs cluttering up their trophy cabinet (cabinets?) but they’ve never been inclined to rest on their laurels. This summer they joined Rattling Stick’s roster, sending excited whispers through the production community. Traktor joining forces with Daniel Kleinman, Ringan Ledwidge and Johnnie Frankel? Yes, very excited whispers indeed.

LBB’s Laura Swinton caught up with Traktor (a.k.a directors Mats Lindberg, Sam Larsson, Pontus Lowenhielm, Patrik von Krusenstjerna, Ole Sanders and producers Richard Ulfvengren and Rani Melendez) to find out why this filmmaking powerhouse has had so much creative trak-tion.

LBB> How has Traktor evolved over the years – are you still the same line-up?

Traktor> We have been the same line-up for the past 12 years. We had one departure in 2003 as the exception to the rule: “The family that dances together, stays together”. He couldn’t dance.

LBB> When Traktor first started up, what were your founding principles – if you had any – and how have they guided you in the work you’ve chosen to do?

Traktor> Our founding principle was: remember to plug the phone-line back in when you’ve used the fax! Somebody might actually call with a project. It was a shared phone/fax line in Sam’s kitchen. He wasn’t up yet.

LBB> You recently signed with Rattling Stick – how did that come about? What triggered that move?

Traktor> We have never been fans of shilly-shallying and playing musical chairs with production companies. We had a very long good run with Partizan, but sometimes familiarity breeds… familiarity. We still love them.

LBB> And what was it about Rattling Stick and Johnnie and the team that made you think ‘yeah, we click’?

Traktor> We drew up a shortlist of companies we liked, but Ringan threw it in the bin. Hard. Rattling Stick have a poster on the wall that reads: “Work hard and be nice to people”. Words to live by. And to join forces with. They are very, very nice people, on both sides of the Atlantic and we couldn’t be happier.

By the end of the first week we had our first Rattling Traktor job, and by the end of our first month we are up and running on our first three on both sides of the pond.

We have already worked alongside Rattling Stick in the Soho trenches, and loved every minute of it. Truly. They outlast us at Wrap Parties, and are already in the office the next morning when we drag ourselves in to pick up our Man Purse that somebody was nice enough to bring home. I think in your country they call them Fanny Packs.

LBB> What was the first project you directed together?

Traktor> Broakulla Non-Slip Rugs. One unlucky person slips and then the next person does not. Because he has Broakulla! Big idea. Small budget.

LBB> I wanted to pick your brains about some of the great projects you’ve worked on… and I’m not sure where to start! Which projects do you feel have been your ultimate career highlights and why?

Traktor> That is a tough one to answer as some of the hardest journeys have yielded the best results. For instance during the shooting of Basement Jaxx’s “Where’s Your Head At?”, we considered quitting and becoming Humanities teachers in Upstate Sweden.

In purely official terms the Grand Prix’es (what is the plural of Prix? [Editor’s note – it’s Prix]) in Cannes along with the Emmy win and Grammy nomination were high points. And catching a couple of Lions this year also helps smooth things over with our landlord. Argh it’s hard to talk about these things without sounding like an annoying guy in a coffee shop. We love all our projects. And we love you. How’s that?

LBB> I’ve been trawling through your archive and there are so many films that I totally had forgotten were by you guys! Where’s Your Head At for Basement Jaxx, for example? Can you remember coming up with the concept for that? What was the brief? And where did those terrifying monkeys come from?

Traktor> Mats had put a man’s face on a Monkey in Photoshop 1.0 and we built a story around it. People said it couldn’t be done, and in many ways they were right. Which is part of the ugly beauty of the finished thing. The monkeys were of the Czech Circus Variety, and they did not come with any certificates or adequate harnessing.

LBB> Here Come the Girls is another classic from the archive – how did a bunch of blokes get inside the mind-set of a bunch of girls getting ready for their office night out?

Traktor> We didn’t. We hired “real” girls from offices all over the outskirts of Milton Keynes and Braintree, and learnt from them as we went. We shot it chronologically, cranked up the iTunes and stood well back. In Croydon. The whole thing took on a life of its own, truly, and we changed to tuxedos for the final shot out of pure excitement. The girls liked that.

LBB> One of your most iconic ads is probably Virgin Love at First Flight – what are your memories of being on set with such a glamorous cast?

Traktor> They were obviously a Crack Unit of Red Velvet, and we could only do our utmost to keep up with them racing our dolly and track captained by our much-loved late Director of Photography, Stephen Blackman, who we sorely miss.

But none of the units were as cracked as Wendy, our P.O-Vixen. In order to create compellingly believable reaction shots from the many onlookers in “Gatwick Airport”, we put an Exotic Dancer (to put it mildly) in a Red Bikini next to the camera on the dolly, and bang in the eye-line of the actors. Wendy would not be revealed (literally, by the Key Grip) until the second take, and that was the take we ended up using for every one of the dozen reaction shots along that fateful concourse. Stephen Blackman had a nice day at the office…Bless him.

LBB> I love how you captured that grey mundanity of '80s Britain – how did you put that look together?

Traktor> We have an Uncle Brian in Bromley and spent the ‘80s shuttling shamefully between Our Price Records, Wimpy and the Asteroids machine on Kebab Korner. We simply recreated Bromley High Street at Ascot Racecourse and, bosh, you have Gatwick Airport! Add Robin Brown – the Production Designer of immeasurable repute – and life is good.

LBB> One of the more recent projects we just love is Sing It Kitty (the little girl is such a munchkin!) Her performance is so joyous – how did you work with her to get out her best?

Traktor> Jodie was a five-year old Energizer Bunny from Manchester, England, England. Again we can claim precious little credit for her performance. We simply ran ahead next to the camera with a toy kitten on a stick to make sure she was looking in the right place. The rest was all her. And loud music. Re-set!

LBB> What do you look for in a script when you’re deciding what projects you’d like to take on?

Traktor> We look for strong core ideas and the opportunity to orchestrate some heart-warming and/or heart-breaking splendour. Preferably with compelling characters who are enthusiastically out to try something that they almost succeed at.

LBB> And when you’re working on a commercial, how do you divide up the work or choose who’s going to do what? Do you feel like you each have different and quite defined roles/strengths in the group (a la The Avengers, I guess!) or what?

Traktor> We don’t think about that too much. After all these years, it seems to work the best when the Director or Directors with the strongest yearning takes the project on. Interest and availability – the twin pillars of Traktor Towers. We can’t all be Pontus. Actually, we can! That is the beauty of it. And him.

LBB> Your archive of work is so diverse in terms of theme, tone, scale, look and technique… how do you manage to keep things fresh? And where do you look for inspiration?

We find that by doing that, the stylistic choices and inspiration comes naturally and naughtily while we are busy explaining to the creatives how “the transitions are going to work”. They always want to know. And the answer is always: “A cut”. But don’t tell anyone…

LBB> I think when I talk to people about Traktor the two things that I hear is ‘wow, they’re so big and amazing!’ and ‘I love the humour in their work’. Over the years, as you became more high profile, how did you manage to retain that wit and sense of humour and prevent yourselves taking it so seriously?

Traktor> It helps that we are a gang, albeit with a license for individual enterprise and cheeky aforethought.

The Gang protects. The individual giggles. And vice versa.

You couldn’t make it up, and luckily we didn’t need to. We share everything: Honour. Humiliation. Money. Sam’s towels.

On the shoot there are sometimes two directors, but very much one voice. But at the dinner there are many. And on the dancefloor there are NO requests. Zilch. Nada.

Thank you for your time!