J. Walter Thompson Paris’ ECD and MD on his dreams of becoming a comic book artist and his adland heroes 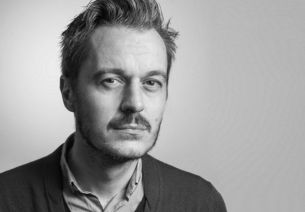 Thomas Derouault’s first step onto the advertising spectrum came after he told a little white lie to a friend at a party, who needed a website made for his new business. Thomas had no idea how to build such a thing, but what the hell? Two weeks later, Thomas had that thing online.

But he was always destined for a creative career. From a very young age Thomas was obsessed with becoming a comic book artist, so much so that, unlike many boyhood dreams, he set about making it a reality and headed for the States to attend comic book school. As he graduated, a scandal surrounding royalties scuppered his – and most French artists’ – chances of ever making it.

Nowadays he channels the roles of executive creative director and managing director at J. Walter Thompson Paris, an agency he finds himself at by way of BETC – under the creative guidance of the famed Stéphane Xiberras – and stints in Singapore and Dubai.

LBB’s Addison Capper grabbed him for a chat to get to know him a little better.

LBB> How did you get into advertising in the first place? Was it always part of the plan or more of a happy accident?

TD> Hell no, it was never the plan. Ever since I was a child, I had wanted to be a comic book artist. I went as far as to attend a comic book school in the States where we would have very intriguing conversations such as, “who would beat who in a fight: The Silver Surfer or The Hulk?”

That being said, we had real comic book legends as teachers and I learnt a lot. Then a scandal about royalties happened and most American editors decided to boycott French artists just when I graduated. So I came back and was wondering what to do with my life. A guy I knew had just started his own travel agency and asked me at a party if I knew how to do a website, as I’d been to art school. I had no clue how to do one but I said “sure”.

In two weeks, the website was online. The rest is history.

At some point I really fell in love with the notion of concept, which ended up to be more exciting than the latest Avengers adventure.

LBB> You’re the ECD and Managing Director at JWT Paris - how do you balance both of those roles?

TD> Well, you might want to ask that question to J. Walter Thompson or all the pioneers of this industry because they did it before me. I think it’s great that a creative is in a managing position in an agency. We need to be responsible and accountable too. It’s a fantastic opportunity, especially in my case, because I don’t really have to do it all alone as there are two other CEOs – Florent who takes care of clients and Virgile who handles strategy.

LBB> Creative leadership is such an important part of your role. How do you get the best out of your teams?

TD> I trust them. That might seem obvious, but more often than not we neglect to let them try things that we might not like at first glance. It doesn’t bother me to see them fail and find a better idea in the process. At least they got the chance to try. I’m a failed comic book artist after all. I learnt a lot from failing.

LBB> Your career has been widely Paris-based but you’ve also worked in the Middle East and Singapore - what did you learn from those experiences and what were the most memorable factors for you?

TD> By a long run, re-examining what you think is right. When I came to Dubai, I arrived as an art director coming from BETC – I was in love with soft-toned very de-saturated pictures, the Air France sort of imagery of the time. During my first weeks, I met Indian art directors who loved explosions of colours. At first this was very discomforting, especially when they’d turn their heads from left-to-right at me in approval (this is typical South Indian body language which comes across as disapproval to the untraveled French man). But I realised that there was no right or wrong and that a melting pot of influences was a much bigger playground.

LBB> Which pieces of recent work from JWT Paris are you particularly proud of and why?

TD> I have to start with CheckNews for sure, a campaign for the French newspaper Libération that is a sort of human search engine. It might be the slowest one in the world but when a user asks a question, it’s a real journalist answering with facts.

Not only did it bring us awards throughout last year but it also changed the relationship between the paper and its readership, and also became a two-page spread, weekly feature. It’s great when a campaign leaves such a trace.

I also love what we do for another newspaper, Le Monde. This work really appeals to the bright spirit of the reader and creates a strong connection between the subscribers and the paper. Ok, that’s the case for a lot of newspaper campaigns but this one really skyrocketed their subscription numbers.

Similarly, what we do for lingerie brand Simone Pérèle or the bank Banque Française Mutualiste really finds an echo in the beliefs and aspirations of their customer bases.

I guess I really like it when we manage to find the emotional link between a brand and its audience or customer base. It’s the purpose of the brand and its meaningfulness to the end user that unites them. If we can find that we’ve done our job.

LBB> What do you look for when bringing in new talent to the agency?

TD> Nothing very specific really. A good human connection is important – I think you work better with people that you enjoy the company of.

If anything, a taste for human relationships. Conversations are pivotal in this day and age, so if they’re interested in people and talking to them – no matter the way or the medium – then we’re on the same page.

LBB> How do you see the state of French advertising at the moment?

TD> It might seem like very misplaced national pride but I think we are doing pretty good. Being a small country in Europe, rarely in charge of the big global campaign, I see a lot of contemporary, relevant work – innovative stuff.

A few years back I would have said that we did very well in handling highly art directed, crafted stuff for French brands or great French, relevant campaigns for international brands. Our frames of reference were the other great agencies in the country and this has deeply changed.

Let’s pay tribute to my roots. I think BETC is doing amazing, just as good in TV as they always were but also capable of pulling the most clever and meaningful use of social media to date with campaigns such ‘Like My Addiction’ for Addict Aide. Respect.

Buzzman is proving to be much more than what most predicted it would be. In its just over 10 years of existence it is already becoming what most agency heads would love to have accomplished. Romance – a relative newcomer – is proving to everyone that these days it’s easy to complain about retailers but some can impress with the sensitive work they do for them. And many independents. I can’t name them all but there is a lot of great work.

And finally, hopefully us soon. We have such strong competition to aspire to beat! It’s very inspiring.

LBB> Looking back, what advice has really stayed with you?

TD> Many I can’t list here but one I can. It might seem naïve but, ‘if you try, it might happen’. It did work for me. I can’t list the times when I thought that I shouldn’t do something and for some reason it did work.

And finally, if I’m allowed a private joke, ‘always trust a grey haired Star Trek fan’. He’s been right all along. He knows who he is.

LBB> What’s the most exciting thing about the industry right now? And the most frustrating?

TD> The playground. The barriers of media have exploded and we never had as many toys to play with.

The most frustrating? I guess you always get the same answer, no? We need to learn how to deal with rejection. It’s not always logical, it might have been the best idea. But no matter what, every now and again something you love will end up in the bin. That’s life.

TD> Cliché: [Bill] Bernbach, but we all owe something to him.

Real life experience: Stéphane Xiberras, who was patient enough to take a kid who thought he knew it all and show him he knew nothing. Half-Mister Miyagi, half-Master Yoda, half-Gandalf, that’s a man-and-a-half I know.

Cliché number two: David Droga. It’s easy to quote him, I know, but he did buy me a beer after I wrongly assumed at a party that he was a French account manager, so that says a lot about the great humble genius he is.

With all due respect: J. Walter Thompson. They say he invented advertising after all, and his company kinda employs me.

And many more: Jacques Seguela, you are the most fantastic, illegitimate father one could wish for. Matt Eastwood, for being the most benevolent man I know in this business. Bas Korsten, I admire you to death. John Mac Cabe, you convinced me I had what it took. Alexandre Hervé, you always manage to pull the campaign I never managed to do but wish I did. Rémi Babinet, I wish I could trade how much I talk for how much you’re great. Fernando Vega Olmos, not only are you the sole man I know who looks classy in a suit with short pants, not only have you always been nice to me, but your work has been a constant source of inspiration.

And for all of those that think they were forgotten, I did name you but they cut into it as I was being way too talkative as usual.