The French animation legend on The Simpsons, Stromae and why France rules the world of animation 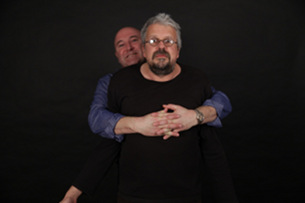 Photo: Sylvain Chomet with th1ng CEO and long-time friend and collaborator Dominic Buttimore at the back.

Sylvain Chomet is a director who always strives to put something of himself into his work – and from the scratchy line work to the languid caricatures and tightly observed facial expressions you can always spot his hand in his work. And what work it is! Best known for his feature animations like The Triplets of Bellville and The Illusionist, Sylvain also has a beautiful reel of shorts, music videos and commercials. Most recently he wowed the Internet with his social media satire for Stromae and a distinctively Gallic twist on The Simpsons’ ‘couch gag’ and has even made a splash in the world of live action with his recent film Attila Marcel. LBB’s Laura Swinton caught up with Sylvain to find out more.

LBB> We loved your Stromae video – the juxtaposition between hand drawn animation and social media was genius! How did that idea come about?

SC> I spent a couple of days with the artist (Stromae) and his mate Orelsan (a French Rapper) in Brussels coming up with the visual idea to match the song.

LBB> Are you a big tweeter yourself? What are your thoughts about social media?

SC> I really don’t tweet, my thoughts are somewhat explained in the Stromae film I think!

LBB> And what was it about the track that made you want to work on it?

SC> I have followed Stromae for some time now and all his songs are great. He’s being lauded as the new Jacques Brel of France, he really deals with interesting issues and this song was no exception.

LBB> You’re famous for your feature films, but have also worked in shorter forms like commercials. I really enjoyed your Winerthur ‘Tomorrow’ ad – the animation and the little world you built totally elevates the script. What are your favourite details and characters in that ad?

SC> I do enjoy commercials and shorter form work if it’s got a great idea in it or I can add to the concept, or both.

Winterthur was a real favourite of mine. The hardest character to conceive was the ‘Tomorrow’ guy. I wanted him to be slightly otherworldly and strange so I had him animated in very smooth CGI to juxtapose him with the real world of the other characters.

LBB> Are there any other commercials that you’ve been involved in that you particularly enjoy?

SC> I made an ad for Fairy with a cute baby in it some time ago, which was fun as I don’t normally do cute. I tend to choose commercials very carefully as I like to be able to add some of myself to them.

LBB> You’ve collaborated with Dominic Buttimore, EP at th1ng, for many years. Why do you think that relationship has endured and worked so well? How do your personalities complement each other?

SC> We met over 25 years ago before all my films and Oscar Nominations, we shared a love of darts down the pub, Ronnie Scott’s and gastronomy. He is my best friend as well as my favourite producer. We share the same taste in art and I think that helps us a lot too. I suppose he just backs me up with his production talent and I do the same for him with my art and animation, it’s always been fun and easy to work together. We both just want to make great work and enjoy doing it.

LBB> We have to talk about the Simpsons Couch Gag! The Simpsons are so quintessentially American and you brought this brilliant European understated bleakness to it. When did they approach you to do it and what were your initial thoughts when you were asked to do it?

SC> It was a great brief from Matt Groening and Al Jean: simply “do what you want with the characters for a couple of minutes”. They approached me a few months before the launch of the new series last year in February, so we had time to create it for the launch episode.

I first thought, well I’m French so why not do a parody of the Simpsons in a French way, make them ridiculous and see where we can go with some silly French stereotypes.

LBB> How tricky was it to translate these iconic characters to your style? How did you go about doing that? What was the character design process like?

SC> It was straightforward for me in many ways really; however one thing concerned me and that was making their eyes wide and like circles. This really isn’t a style that I do, so I decided to give them all spectacles, which got my style in the right place but also mimicked the Simpsons better.

LBB> And what was it like working with the Simpsons team?

SC> Great, they gave me complete freedom. We did a call with them and talked through the idea, Dominic wrote it up, I storyboarded it and then made it with th1ng. They didn’t change anything – just totally loved it, the perfect client really!

LBB> As a Scot, I have a special affection for the way you brought Edinburgh and the Highlands to life in L’illusionniste – what are your memories of working in Scotland?

SC> I really did enjoy being there, I actually lived in North Berwick which is a beautiful part of the world. In the end I moved back to southern France to get some decent weather which sadly is one of the things Scotland doesn’t have (neither does England for that matter!).

LBB> France is traditionally very strong in animation and produces some brilliant talent – why do you think that is? I know there are some good universities but I was wondering if there was also something deeper to it too?

SC> Drawing is big in France, especially in comic strip art (which is where I started too); this leads naturally to animation in many ways. Also there is some good funding to encourage filmmakers in animation, which helps.

LBB> And what are your thoughts about the younger generation of French animators – is there anyone who is really exciting you right now?

SC> I happen to be the patron of an animation school in south of France called MOPA. The teaching is absolutely spot on and the last year’s students’ films are incredibly clever, beautifully crafted and hugely innovative. Although they only teach 3D, it shows how skilled the young French artists can be when you give them the means to express themselves.

They are full of ambition, which is the key to succeed in the art of animation. But France is a country which doesn't like ambitious people. The best ones will move abroad, the other will find a secure and non-demanding job in Paris. Welcome to the least inspiring country in the world. Still the food is great here...

LBB> You graduated in 1982 – since then the field of animation has changed so much. It’s produced for and watched by adults as much as children, it feels like you can tackle much more adult-orientated themes and stories. Japanese animation seems like it has far more of a cultural influence in the West… There’s also the boom in digital tech and 3D animation which means that there are so many different ways to approach it… Are all of these changes for the best? What’s exciting you about the evolution of animation? And are there any changes that have been less positive?

SC> I have recently started using a pen and tablet on Cintiq to create “hand drawn” animation and I am enjoying the flexibility this gives me to work with my team and quickly correct and tweak things, which is an exciting development.

I am always concerned that animation has the feel of humanity in it and am often a bit concerned that full CGI loses some of this. However animation seems to have grown up and is being used much more these days, which is great.

I am working on a new feature film called The Thousand Miles based on a Fellini storyline and I’m developing a hybrid technique for this… watch this space.

LBB> What advice would you give to young people thinking about getting into animation today?

SC> It’s a lovely business to make your living from but it takes hard work, practice and obviously talent to get there.

LBB> I read somewhere that you wanted to make a feature in either 3D or live action – is that something you’re working on? What is it about these formats that make you want to work with them? I imagine animation can get quite lonely at times – is the liveliness of the live action film set something you yearn for?

SC> My last film “Attila Marcel” was fully live action, which I enjoyed making very much. Yes, it was great to work with the relative immediacy of filming and with actors who do what you want without having to draw them first! However in animation I do work with a great team, so its less lonely than you might think.

SC> A couple that I could mention are:

Jacques Tati, who I animated in l’Illusioniste. He was very inventive and clever. I really enjoy his films, which have always influenced me especially as many of my films use little or no dialogue as he does.

Marcel Pagnol, Film Director, producer and writer. I am working on a documentary project about this man at the moment. He was a very successful and poignant filmmaker in France.