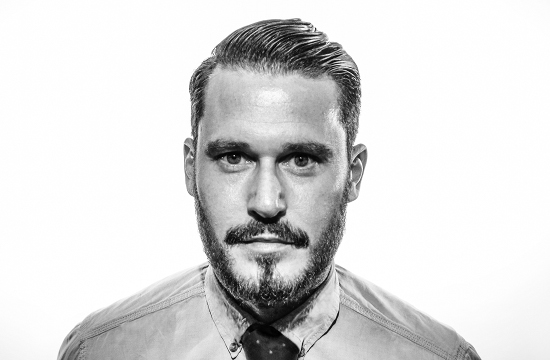 Pierre Janneau always thought he’d end up in a suit-and-tie job. It was only when his grandfather inspired him to embrace his love of art and drawing that he dropped out of an economics degree to pursue graphic design. It was a smart move. Now after years in the industry, he’s relocated from rainy Amsterdam to sunny LA to work on adidas, a brand that’s been close to his heart since his childhood as a French football fan. LBB’s Laura Swinton caught up with Pierre to find out more.

LBB> What was it about 180LA that tempted you to move to the States?

PJ> W+K and 180 have always been two agencies that I’ve had my eyes on for a long time. When I headed to W+K in 2006, I continued to follow 180’s work over the years and the opportunity at 180LA came at the right moment - just as I was thinking about my next move. I met everybody here one afternoon and had a great feeling about it. I really liked the vibe, the size, the people and the work. And the view of the ocean is quite spectacular.

LBB> How have you found the transition to the US industry and life in LA? How does the creative and industry culture differ from Europe?

PJ> The main difference here is that we mostly work for the North American market, which means that I really had to adapt to the culture and understand what people like here in the US. There’s a certain tone that is significantly different here in the US from Europe, where every country comes with its own identity and what is relevant in one country may not be applicable in another. It all comes down to getting immersed into a new culture and taking it in little by little.  And it’s a process that takes time.

Life in LA is radically different from Amsterdam. I realised that walking wasn’t really going to get me far here so I had to trade my bike for a car. The weather is definitely something that brought me here. After eight years of heavy rain and long winters, I wanted to see what it was like to wake up every day with the sun, and so far I haven’t been disappointed.

LBB> You're overseeing the adidas account at 180 after working on Nike for years at W+K. What does it feel like to be switching sides? And what are you looking forward to most about getting stuck into the brand?

PJ> When I started in advertising I wanted to work for brands like Nike or adidas. At that time 180 and W+K were sharing the same canal in Amsterdam and were producing amazing work for each of those brands. I enjoyed my time working on the Nike brand.

adidas was the first sport brand in France; they sponsored most of the soccer teams and especially the national French team. I grew up with adidas. My first soccer shoes were adidas ‘Copa Mundial’, still probably one of the best soccer shoes ever made. It’s always been a great iconic brand that I’ve loved.  Being French, it goes without saying that one day I would have some sort of relationship with adidas.

LBB> Where are you from originally and what sort of kid were you? What were you into?

PJ> I was born and raised in Paris with strong roots from the South West of France. Sport has always been part of my life, since I was a little kid when I shared my time between tennis and football. I was 23 years old when France hosted the ‘98 World Cup. It is an amazing experience to have the World Cup played in your country when you’re a soccer fan. It’s a unique experience that brings a country together for the course of a month. I was in the stands on the goal line when Zidane scored his two headers in the final game against Brazil. That day is still one of the best days of my life. adidas (France’s sponsor) won the final against Nike (Brazil’s sponsor).

To this day, I still talk about that momentous event like it happened yesterday.  But hey, I know that’s almost 16 years ago. The French team has changed just a bit since then.

LBB> How did you first get into design and advertising? What was it about the industry that lured you in?

PJ> After my baccalaureate, I did a year of economic studies at the University of ASSAS in Paris and quickly realised that wasn’t the right thing for me. My grandfather used to paint as a hobby and he inspired me to do what I really liked, so I followed my passion for drawing.

This is how I started my graphic design studies at Penninghen. Prior to that, I never thought it was possible to do anything other than economic studies, law or business school. Graphic design and illustration were my focus during those years.  Advertising came after; it was a natural transition that kind of fell into place.

LBB> You studied at ESAG Pennighen - what was that like?

PJ> I studied for five years at Penninghen from 1995 to 2000. I wouldn’t say it was easy as the education system there was quite intense. There was a lot to do and the pressure to succeed and get to the next year can sometimes be difficult to handle. But that’s why it is such a great school. We learned everything from nude sketching, drawing, painting, photography, typography to model making.

This is a complete graphic design program.  Far from an advertising school that teaches you only the trades of advertising, Penninghen gives you all the tools related to all forms of art that enable one to choose what to do after. Graduates of Penninghen have become directors, animators, creatives, graphic designers, illustrators and photographers.

I liked this discipline as it pushes you to give your best and develop your talent through hard work. At that age you could be tempted to think that art school is 20% working and 80% smoking cigarettes but Penninghen was definitely not that.

PJ> Most of my inspirations come from graphic designers, photographers, directors and artists. The full list would be too long but just to name a few, Wim Crouwel, Saul Bass, Rodchenko and Sagmeister have been real inspirations to me and significant names that have pushed me towards graphic design.  Stanley Kubrick, Jacques Tati, Wes Anderson for their amazing sense of visual composition and attention to design.

LBB> What pieces of work have you been involved in recently that have really resonated with you?

PJ> I’m really excited about the projects I’m working on right now at 180LA. But of course I can’t talk about them just yet.

I worked on several Nike projects before coming here to LA. One of them was the launch of Nike ‘Just do it’ in Turkey. We created a ‘human printing press’ using athlete’s movement to power this giant installation. That was a lot of hard work but a very fun project that felt different from others.