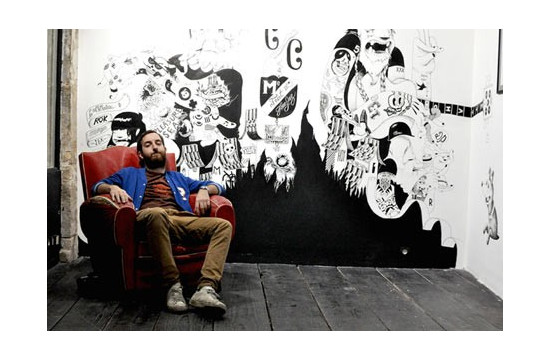 With its distinctive 21st-century-alt-meets-Max Fleischer style and cast of hallucinatory characters, like the tattooed psycho huntresses Les Viandardes, the bearded Mountain Man and a terrified slab of steak, the work of McBess is instantly recognisable. His personal style – monochrome and complicated – has helped Matthieu Bessudo grow from being a 3D animator beavering away in the backrooms of The Mill to an international artist, director and brand. However, his directing partnership with fellow director-illustrator Simon Landrein has opened him up to new influences, styles and aesthetics. The pair have recently signed with Passion Pictures and Laura Swinton caught up with the bearded Frenchman, McBess, to talk art and music, meat and cheese, and why TV is his next ambition.

LBB> You and your directing partner Simon Landrein have just joined Passion - why was now the right time to hook up with the company?

M> We’ve always looked at Passion as one of the best production companies in London. When I arrived about seven years ago with 15 other French guys from the same school, from the same class, we all dispersed into the industry. I went to The Mill, some went to Nexus, some went to Passion and over the course of the years you begin to hear… echoes. It sounded like a really good company – and then there’s all the really good work you see everywhere. I think The Mill was really cool. When I made the transition from being a 3D animator to being a director they were supportive but I could see the limits. They still felt very much like a post-production company. I guess we lost patience, Simon and I.

LBB> Where did you and Simon meet? 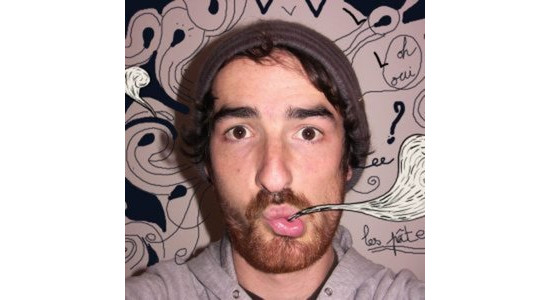 M> Simon was at the same school as I was, but a different campus. They have one that’s sunny and nice in the South of France and one in the North – that’s the one Simon went to. I feel that’s reflected in his character! I am the ‘sunshine’ member of the team! He started the year after me.

We started working together on a short movie called ‘Woods’.

LBB> And the school you went to, Supinfocom, has produced quite a few successful animators and directors in its time. What was that like as an experience?

M> I think it’s slightly different now, but at one time it really was a nest for of the best short movies in France. There must have been that first batch of really good filmmakers that then attracted everyone else to go there. I wasn’t any good at all but I was surrounded by so many crazy-talented people – some of whom are at Passion now. It definitely made me want to create better. The teachers were really bad but it was a ‘creative bath’. There was a lot of sharing and learning from each other. It was really good but I haven’t really followed it recently.

LBB> When you first went to school, were you solely focused on animation or were you illustrating and working on that McBess style back then?

M> When I first arrived at school, the first two years weren’t really about animation; they focused on learning the Adobe suite. We did AfterEffects but also Photoshop and Illustration, and I started illustrating then.

It stayed with me for a while. At school when we were making our movies, we didn’t have much time to see friends and family so I kind of invested myself even more into illustrating. I’d do it while I was waiting on the rendering and things like that. When I arrived at the Mill I kept doing the same thing – as long as there was no producer on my back, I would draw. It was just an underlying thing that kept developing. 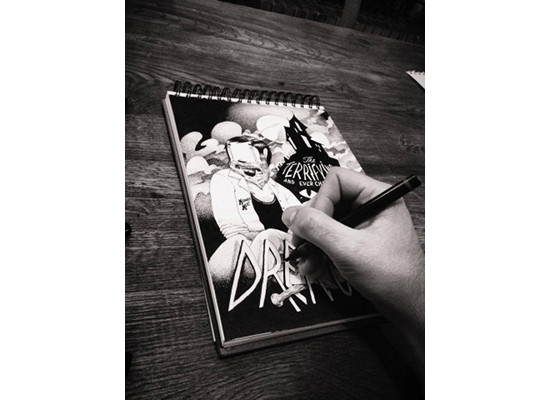 LBB> A lot of your illustrations have a really distinctive style, inspired by early cartoons – was that something you were always attracted to or did it evolve gradually?

M> I think everyone has their own recipe to create their own style. I did mine by copying other guys, and then I adjusted the curves and brought in my own influences. When you look back at what you used to copy there are next to no similiarities.

I really love this sort of era – it’s what I was raised on. My Dad made me watch these cartoons when I was a kid. There are two things that really remind me of that era: the black and white, which I really love, and there’s the typography. I love that bold look, it’s old fashioned. When I was 15 I used to do graffiti but I never really fell in love with that style.

LBB> So when you’re working with Simon, it seems you’re both bringing different influences to the table.

M> I think that these days Simon is beginning to become known for a style which is very simple and colourful, whereas I’m really, really detailed and work in black and white. It’s very, very different. It means we have different references and it means when we work together, depending on the type of project, one of us will take charge. But it’s not like the other person doesn’t do anything creative; it’s more the case that one will take care of the style and the other one will take care of the direction.  It’s worked particularly well so far and, also, I can imitate what he does and he can imitate what I do.

Every project is different and so it’s hard to generalise. Even if my personal illustration style is black and white, I enjoy doing creative direction in colour. Advertising is a good outlet for creating in other styles. 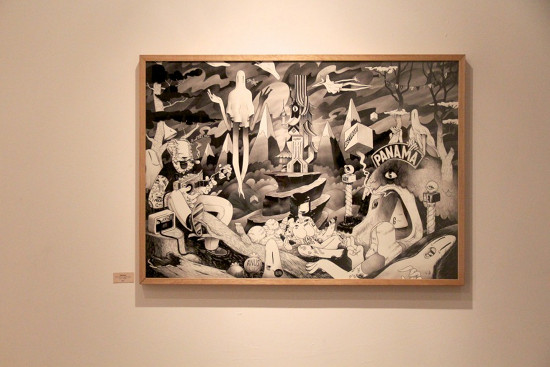 LBB> On a personal level, what are the benefits of working in a twosome? If working on your own illustration can get quite solitary – do you enjoy having someone to go play with?

M> I think there are so many upsides to being a duo – you can do twice as much work.

It sounds a bit like I’m showing off, but for example, with the Essar ad we were able to go down to the tiniest details. We did everything down to the packaging design for the box of the chalk that the guy picks up. We came up with the technique for the time-lapse – which isn’t ground-breaking but still, we figured it out ourselves. We worked on the music too. It was really good fun – the clients were pretty flexible.

LBB> And talking of music, you’re also pretty musical yourself, with your band The Dead Pirates.

M> Recently we’ve been taking every opportunity we can to play. The band is made of people who are my friends but who are not necessarily musicians. That makes for a really good mood within the band, but in the early days it wasn’t so good for our gigs! But we’ve just finished recording – it was amazing because we recorded it live, which is something that’s normally quite hard for bands to do. This is the beginning of one of my new things; I’m going to set up a record label for my own band and one or two others. We’re just interested in releasing a tiny number of vinyls and putting on some nights.

LBB> And the coming together of your animation and music is quite interesting. How do you see the relationship between the two media?

M> I think what’s more interesting is that now people really separate them out. You’re either ‘an artist’ or ‘a musician’ – separating something which is meant to go together. I mean, ‘image’ and ‘sound’! I was a musician before I started anything else, even before I went to school. They live together. I can’t see one without the other. 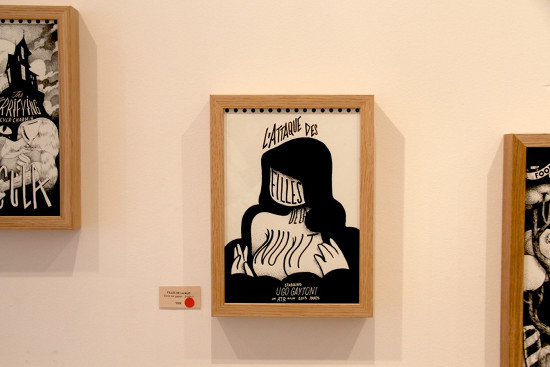 LBB> So you do illustration, animation, you’ve got a band, you’re setting up a record label and you’ve a fashion line too… is there anything that you haven’t done that you want to do?

M> I think for now what I have in mind is direction and animation. I’m trying to develop a script for a TV series and I want to do live action. I’m also making a recipe book with my friend Hugo. We’re going to rent a house in France and lose ourselves in the cooking, writing the book at the same time.

I think it’s going to be quite French. It will probably feature quite a bit of cheese and meat. It’s something basic that you share. I have a real passion for it but it’s something that anyone can relate to.

I don’t want to be like the guy who wants to do everything, but if an opportunity comes along I’ll give it a try. If it’s good, it’s good. If it’s bad… well, I just won’t tell anyone!

LBB> So I guess that having all of these avenues means that you aren’t entirely reliant on advertising. How does this freedom influence your approach to advertising?

M> You need to be fuelled by something else. For example the Amesty International work came about because I was doing some art on the windows of a bar in Hoxton Square. It wasn’t for much money but it was fun and it was making fun of hipsters. One of the creatives from Mother saw it and asked me if I wanted to do the animation for the Secret Policeman’s Ball. It means that you can enjoy the work you’re doing.

Advertising is an opportunity to work with different sorts of creative inputs. If I was stuck doing black and white illustration the whole time I would probably go fucking crazy! It’s nice to have a bit of choice.

LBB> You mention fuelling your creativity by doing different sorts of creative activity, but what do you consume, watch and listen to?

M> I watch an unholy amount of TV series. When I listen to music I get really, really over-excited, but if I watch TV series, it really helps me focus. I watch them in a loop. There are some TV series I think I’ve seen 20 or 30 times. It’s usually comedy – if I put drama on I have to follow it to find out what happens next but if it’s a comedy I just need to listen out for a joke coming up.

It depends on what part of the process you’re at. If I’m looking for ideas or trying to get myself in a mood maybe I’ll listen to film soundtracks or something like that. But when the work is there and the rough is laid out and I just need to sit down and work through it I’ll put on a TV series.

M> I think it’s been threatened and now it’s making a bit of an effort. It’s saying ‘don’t kill me!’

I find it more interesting. If I had to direct something long format I’d rather do a TV series than a feature. I like characters; long features are about the story while TV series are about building up characters and adding details and back-stories. Have you seen Trailer Park Boys? The story is nothing more than seven series of a guy with a camera living in a trailer park and it’s totally ridiculous but it’s also amazing.  I love the way it builds up the camera and shows you their weakness. Don’t get me wrong, I love a good film, but I think there’s something really interesting about TV series.

LBB> And what does the rest of the year hold for you?

M> Working at Passion. I’m going to Argentina to do some talks, which is good timing because I’ll be able to tell South American markets that I’m about. I’m doing an exhibition in Buenos Aires. I’ll be recording the album with my band and of course doing the recipe book.