Partner & Technical Director at Jam3 on art and video games 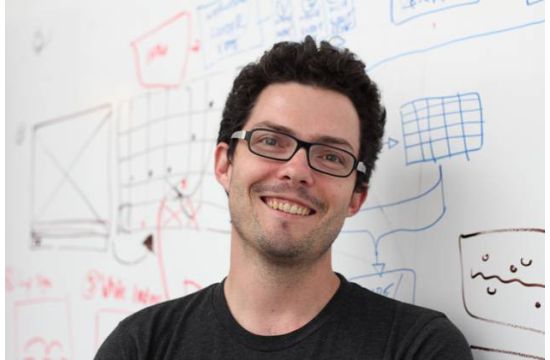 Mark McQuillan’s story should warm the hearts of fans of creativity, literature and good old fashioned storytelling as they strive to make their way in this tech-driven world. The Technical Director at Toronto-based interactive design agency Jam3 originally studied English and Film before doing a crash course in Interactive Media. And creativity, craft and hard core coding skills have proven to be a killer combo. Since setting up Jam3 with Adrian Belina and Pablo Vio the team has devised numerous FWA-winning projects and their absorbing online experience Bear 71 netted them a Gold Lion at Cannes, and One Show Gold Pencil and a Webby award. Now in its tenth year, Jam3 has gone from start-up to grown up. LBB’s Laura Swinton caught up with Mark to find out his policy on suit-wearing.

LBB> You founded Jam3 in 2003 – what was the original purpose or manifesto you guys had when you founded it and how has that evolved over the past decade?

MM> Jam3 started as a collective of designers and developers, we just wanted to do good work and stay in charge, and dictate our own lives. I made a point of working with people who were passionate about the work, so there were some people who came and went in the beginning before settling in with Pablo and then Adrian.

We worked out of our bedrooms and finally, setup shop above my garage. It was there that we hired our first employee, I wore joggers and he wore a suit. In the past 10 years, Jam3 has made the transition from collective to corporation. I wear a suit every other day now.

LBB> And how did you celebrate the tenth anniversary of Jam3?

MM> It crept up on us and we just don't feel that old. I think because the company really came into its own in 2007 this is the real anniversary date. When that 10 year comes it will be cause for a cake and a ball.

LBB> How did you and Adrian Belina and Pablo Vio originally meet and why did you decide that these were the guys to form a company with?

MM> The three of us met at Sheridan College’s Interactive Multimedia program. I found the program's super intense one year format to be challenging and quite character revealing. It would be 4 am and I'd look around the lab and there were the usual suspects still at their desks. Pablo and Adrian were among this group of diehards. It was a great learning environment where you could always count on someone to help work out a bug in some code or get opinions on a design. These guys shared a passion for creating cool experiences.

LBB> You were an arts student I believe originally (English and Film) but you’re now head of all things tech at Jam3. I’m interested in what first drew you to the world of interactive and digital?

MM> My father had constructed a movie theatre in our basement. He went all out, bought theatre seats and built tiered seating. The only thing was the basement wasn't very big. So right beside the silver screen was my computer desk and my mom's art studio up against the stairs. I guess this appreciation of storytelling, the attention to detail mixed in with computers was a great influence.

When I first saw Flash in the browser, it was a revelatory experience. I knew this animation + code combination was just the tip of an iceberg in terms of what was going to be possible via the web. These influences have been co-mingling for a long time.

LBB>… and I wonder how important or useful you’ve found it to have an arts background rather than a pure programming or technology-based education?

MM> It's an interesting question because people often joke about the BA degree and say it's all fluff. But I've been working with creative people my whole career and the arts education armed me some critical thinking skills and tools. I certainly wouldn't be where I am had I gone down the computer science route. CS guys play in an integral role in our field at the same time, but what we are doing at Jam3 is effectively communications. Seeing the technology as a tool in this context is what the arts primes you for.

LBB> Bear 71 was a powerful piece and has been very successful over the last year. What was the starting point for creating that project? And why do you think it has been so popular?

MM> Oh that poor bear. We have been working with the National Film Board of Canada on a number of interactive documentary projects over the years. In the case of Waterlife  it was a full length doc that we distilled down into an interactive experience.

What makes Bear71 most interesting is that it was conceived specifically for the web. The starting point really was a one page brief retelling the sad story of this specific bear. The finger of blame was pointed at you and me. Humanity is encroaching on the natural habitat of the Bow Valley at a rapid pace. Conservationists monitor and manage the change through a network of motion triggered cameras. We had access to literally terabytes of data to support the story.

Anthropomorphism is powerful storytelling device. If the story is told from the first person perspective of the bear the audience will instantly empathize. This was key to its success.

The technology we employed to tell the story was the gravy. We used an interactive stylized map that doubles as data visualization that turned out really cool. It was a multi-user experience too. The message (spoiler alert) hit home  when site visitors realized that they were actually being monitored themselves. Through an innocuous opt-in, they come to realize they have been streaming themselves to other site visitors; in the end, they felt bagged and tagged themselves.

LBB> One recent project has been Norton’s Enjoy Your Privacy – what was the greatest challenge with developing that multi-platform story?

MM> Well, that's a toughy. There were lots of challenges, but there wasn't one that rose above the rest. However, I must say when we the project kicked off, iOS7 wasn't even announced. And when we finished, it was in market, and our QA efforts were spanning a heroic spread of device and OS combos. It was a big headache.

"Enjoy Your Privacy" -- An interactive narrative from Norton Mobile from Jam3 on Vimeo.

LBB> And – as technical director – what did you learn working with a giant tech brand like Norton?

MM> When you deal with a security company like Norton, they're going to be pretty buttoned up on the deployment side of things. Understandably of course. But it's just not something you really plan and budget your time for.

LBB> I’m interested in your ideas about how we should think about new forms of storytelling. For example there’s a debate about video games which suggests that videogames are becoming more cinematic and therefore taken seriously, whereas others argue that games need to be taken seriously as a medium in its own right. Are people too caught up thinking too rigidly about different storytelling platforms? Or do different platforms lend themselves to different kinds of stories?

MM> I'm excited about new kinds of storytelling. What will the proliferation of 360º video technology, VR, Omni's and brain sensing technology  do to storytelling? Kaboom is all I can say.

Technologists and storytellers go hand and hand. Video games are and have been their own animal since we jumped a Goomba and saved the princess. While recently they contain better and better gameplay that blurs the line between cut scene and gameplay, they are inherently non-linear, temporally relative and contain things like level of difficulty etc. Would you compare a choose-your-own-adventure book to a classic like Huckleberry Finn? Or a poem to a novel? Video games deserve serious attention regardless of film. It's its own medium. I'm just excited to be mashing it all together.

LBB> In terms of new talent, where do you hunt out new people for the Jam3 team and how do you foster new talent, especially people who are new to the industry?

MM> New talent comes from a predictable and unpredictable places. We don't have one strategy. I maintain connections with several universities and colleges to pick up new recruits. I go to speak, sit on advisory committees and we participate in co-op programs. These are long tail strategies.

On the short side, we post frequently on social media channels, attend industry events on both the creative and technical side of things and are quite social when it comes to talking to strangers shooting the poop and finding like-minded passionate people who love the craft. At the end of the day, we're looking for team players, people who want to learn and those who work/play for the love of the game. These the are the people who slap back hard in a quenching high-five at the end of the day.

LBB> In terms of tech developments, what do you think are going to be the big stories in the coming year?

LBB> My personal hope is that WebGL on mobile makes its debut, formally. There will be even a greater surge in 3D printing. "Online" experiences will continue to punch through the screen and touch our lives in even more pervasive and potentially pernicious way. Of course, the new gaming consoles are coming and the graphics will be ridiculous. The new Kinect will be hacked (again) with much fanfare and interest. AR peripherals like Space Glasses are really exciting as well and open up a new world of opportunity. I'm sure I haven't covered all the 'it' stories, there's always a bunch of surprises!