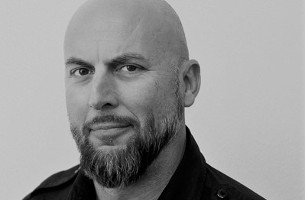 You know how people hate career politicians and always say they’re happier to trust someone who’s lived in the ‘real world’ first? Well, there’s something to be said for that argument in the advertising world, too. Just take Kenn MacRae. He’s worked everywhere from the medical world to landscaping and written and directed feature films before ending up a creative 20 years ago.

Even since then, he’s lived a varied life, holding Creative Director positions in Australia, America and Europe, most recently as Executive Creative Director and Partner at Sid Lee in Amsterdam. Early in 2017 he became ECD at iris Amsterdam to take the lead of the agency’s burgeoning creative team.

LBB’s Alex Reeves caught up with him to see what kind of wisdom he’s picked up on this journey.

LBB> What was it about iris Amsterdam that inspired you to join as ECD earlier this year?

KM> Fundamentally their desire to elevate the creative in Amsterdam. I said at the time that the whole network could be summed up as ‘great people with great plans’ – and that’s been confirmed many times since.

LBB> What were your goals for the agency when you started?

KM> To help iris Amsterdam become bigger and better. expand the size of the business.

To go beyond the remit, and expectation, with each and every client.

LBB> And how has your first few months at the agency been? Any particular surprises or stand-out moments?

KM> The speed of growth: it’s been nine months now, and we’re approaching double the size of the agency to when I began.

LBB> You've worked as a Creative Director across three continents. How does the Amsterdam creative scene differ from the rest of the world?

KM> It’s chronological as much as geographical, but the first would be genuine media-neutrality - the willingness for unconventional approaches. The influence of the city’s 75 museums would be another. JWT’s The Next Rembrandt is a perfect example of both those things combining. And as a true international hub, the diversity of the workforce is obviously a huge difference, and benefit.

LBB> What do you miss most about Australia and the US?

KM> Same for both: being with fam and friends. Being in the ocean.

LBB> How did you end up in advertising? What was your first job like?

KM> ‘Ended up’ is about the size of it. Dropped out of uni. Worked in housing securities and foreign exchange for a bank, did the barman/bouncer thing, studied anaesthetics and worked in surgery as an intern, rode motorbikes as a VIP escort. Really. And I was a landscape labourer, which was like going to the gym with a bunch of comedians, so that was a highlight.

Writing was always something I enjoyed and was relatively good at, and my brother and some other mates worked in agencies – they opened my eyes to being paid to write. So I did AWARD School to get a book together.

My first agency job was with a rambunctious, unapologetic, driven start-up called VCD whose founders were brutal and brilliant judges and mentors. It was a true cauldron, dog-eat-dog-eat-cat, and a place where only the best thinking survived.

LBB> When did you make your first forays into filmmaking and what were the key experiences that shaped your development as a screenwriter and director?

KM> I’m the oldest of five and my siblings and I were always film nerds – not buffs, or experts - just the type who’d have a line or gesture from a movie for every situation. True to this day.

I read voraciously when I was young and wrote a lot of stories – seeing the effect they had on people was the first experience that showed me I could move people with words.

More pragmatically, my brother Simon – an Art Director in New York at the time – and I began writing screenplays in ’98, and had a few meetings in LA with the finished products to enough acclaim to encourage us to continue. But it was winning the Matt Damon/Ben Affleck-created Project Greenlight that really propelled us into directing. After that we started a commercial production company, then I moved to Hollywood to do another feature.

LBB> How has your experience storytelling in film affected the way you approach advertising briefs?

KM> It’s just reaffirmed it: being able to express an idea clearly, succinctly, originally and emotively is key.

LBB> And vice-versa, has your advertising career had an impact on how you make films?

LBB> When you're not running an agency creative department or writing and making feature films, what do you like to get up to?

KM> Hang with my fam.

I still love movies. And I love seeing them in cinemas.

I try to hike a mountain any city I visit. I’ll watch almost any motorsport live.

LBB> What advice do you wish you'd had earlier in your career?

LBB> How do you work with creative teams to keep them motivated and inspired?

KM> Play to their strengths. Remind them of what’s possible. Use humour. Avoid dad jokes.