Photographer & street artist on Inside Out Project 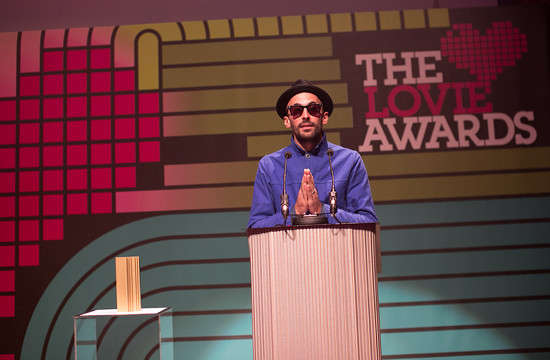 Originally a graffiti artist, French-born JR began dabbling with photography aged 17 after stumbling on a lost camera in the Parisian Metro. That experimentation with still images led him to realise the impact he could have with photography compared to graffiti – at the time it was seen merely as vandalism and definitely not an art form. His unmistakable human-based projects have touched thousands of people globally with more than 120,000 people in 120 countries participating in the most recent, Inside Out. The project gave people the tools to create their own portraits to paste in the streets. He was a TED Prize winner in 2011 and has just picked up Artist of the Year at the Lovie Awards. LBB’s Laura Swinton caught up with JR to find out how he juggles the balance of art and impact.

LBB> Your most recent project, Inside Out, was an interesting one because it seemed like you were relinquishing your power and giving it back to the people involved in the project. How did the thought to do that initially come about?

JR> When I knew I could produce pieces of work that could be seen by a lot of people, I wanted to do a project that would touch as many people as possible. But I didn't know it would go quite as far as it has. It’s crazy because people do the whole job; they take the photo and paste it, I just print it for them. Sometimes I go and observe them pasting them up, but it doesn't really help them for me to be there so I generally just watch it through pictures or on the Internet.

Recently the Inside Out movie released in Paris and at the launch we had an Inside Out photo booth truck. Most of the portraits are printed online, but when we have the booth it’s fun because people get their prints right away. At the launch there was an eight-hour line to take part. People were literally turning up at 8am and not getting their photos until the late afternoon. It was crazy.

LBB> I guess that some people are quite confident to do creative things on their own, whereas some aren’t – and you are really giving them the tools to do it.

JR> This is true, but some people underestimate the power of living – the people standing for eight hours in the cold are doing the hard work. Printing the photo is the easy part. The Inside Out process can make people realise that they do have the power, we just give them the platform to help express it.

LBB> Your work is very human – have the experiences you’ve had with people changed your feelings about them and humanity?

JR> Maybe a bit. I’ve seen a lot of violence in the world, but at the same time I’ve seen so much more strength and positivity from people. It’s these things that make you forget the negativity and believe in humanity. And now people are pasting their portraits for Inside Out in places that I’ve never been to – 120 countries in total around the world. I’m really amazed to see that it is reaching places I’ve never been and people I’ve never met.

LBB> The first piece of your work that really caught my attention was Women Are Heroes. You travelled to countries from Kenya to Cambodia and Sierra Leone in order to photograph women living among violence. Why did you initially decide you wanted to visit the places you did and focus on women specifically?

JR> It was really because my work in the street is illegal. To paste there I would have to convince the men because they own the street. In these places which are torn apart by violence, the women are pillars of society, you can clearly see it if you visit. So the idea came from wanting to work in the street, but because I knew my only barrier would be men, I thought it would be interesting if I were to focus on women.

LBB> How long did you spend taking the photos when you were out there?

JR> The project went on for three years, but generally I would visit a place for around a week to take photos before coming back and printing for about 10 days. Sometimes I would do it right away – in the Brazilian favela I would take a photo, print it that night and paste it the next day.

LBB> You started out as a graffiti artist before moving onto the photography side of things. When did that evolution happen and why do you think it did so?

JR> I think it happened when I was about 17 or 18. I found a cheap camera and started using it, and realised that photographing the street had more impact than graffiti just because more people can read it. But I wouldn't say that I was a graffiti artist back then because people wouldn't see graffiti as art – it was seen as vandalism. It’s been interesting to observe the evolution of street art during the past 12-15 years into an actual ‘art’. When people first started considering my photography as art, they would say things like “maybe that’s art”. It was a gradual process – people weren’t even sure themselves.

LBB> I suppose people can read the photography easier because your use of human faces must automatically draw people in and relate to them.

JR> Yeah, the face is universal. If I paste just a picture of eyes, because people can’t recognise who the person actually is, I think it makes everyone feel represented in their own way.

LBB> You were recently awarded Artist of the Year at the Lovie Awards – what do you think they’ve seen in Inside Out and yourself to make them want to present you with it?

JR> You know, sometimes I feel a bit stupid that I didn’t start using social media sooner – it’s all quite new to me. I use the Internet as a tool – for example, to host and spread the Inside Out message. I find it amazing because it really gives you a vehicle to have an impact on the world. Inside Out has to actually happen in the real world, but the Internet is pivotal to gathering people to take part and spreading the message.

LBB> You mentioned the changing perception of graffiti and how it’s now seen as a valid form of art. Do you think a similar thing is happening with online or digital at?

JR> The thing with the Internet is that we can spread and pass immediately. An artist that completes a piece can just post and spread it. But when it’s in the street, there’s something you can never reproduce – not on social media or anywhere. I don’t know any movie or virtual thing that can beat that – the impact when you’re actually experiencing something in the street is the strongest, no matter what. I think you have to be with the platform something is hosted on because it can really effect its power. Especially street art. It can be documented, but can’t be changed in any way.

LBB> I’ve seen pieces of yours a few years back around Shoreditch in London – they gradually kind of disintegrate due to the weather. It’s much more real than something passing through your social media feed.

JR> The documentation of it is the only thing that will last, for sure. That’s why it’s important to do so. But the experience you get from seeing it for real is impossible to recreate because it’s an experience. It’s exactly like at the launch in Paris recently. What people remember about that day probably isn’t the portrait, it’s the experience as a whole and the interaction with people they may have met in the queue. Maybe Inside Out is just a huge, crazy big project to meet one’s neighbour!

JR> That’s something I’ve never heard before, but it’s what I see. I saw friendships forming in the lines in Paris, even if it was just over holding a person’s place while they went for a pee or sharing a cup of tea. I think it brings people together.

LBB> Have you got any projects planned for 2014 or further ahead? Are you planning to expand Inside Out more?

JR> It’s not always about making things bigger, it’s about making sure it can happen in any kind of context. And even in the smallest country or smallest place it can have a different meaning, so there’s always something to learn about. That’s how I approach the next project: I try to evolve it in different contexts.