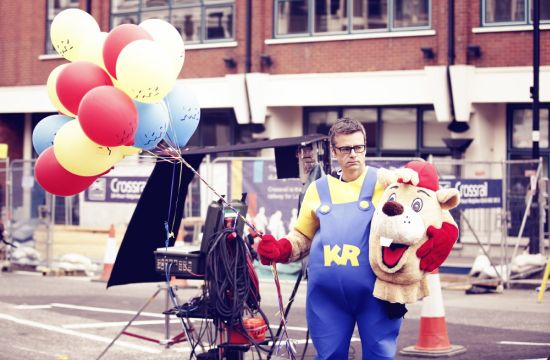 2014 has not been too shabby a year for James Rouse. Not only has he released his first feature film, but his love affair with adam&eveDDB blossomed like a rose in sunshine when his paean to Christmas selfishness for Harvey Nichols took a Cannes Lions Film Grand Prix. ‘Sorry, I Spent On Myself’ for the luxury English department store was the unexpected dark horse in Cannes, with its unmistakably British humour loved by the international judges and attendees. Outsider director Rouse told LBB’s Laura Swinton why he thinks it struck a chord with so many and, thanks to his hiking-themed feature film ‘Downhill’, he feels lucky to still be here.

LBB> First of all – congratulations on the Grand Prix! Where were you when you discovered it had won and what was your first reaction to it?

JR> Thank you! I was having a BBQ at home with some friends. I normally drink beer with my BBQs. On that Saturday I drank champagne. A little bit of Cannes came to North London!

LBB> Harvey Nicks was the sneaky underdog of the week – we were definitely hearing a lot of buzz around it as the week Cannes progressed. It’s a project with a very subtle, British kind of humour – why do you think it did so well with an international group of judges?

JR> Yes indeed, we were the sneaky underdog. I think it did well internationally because it was a universally funny idea (rather than script) that everyone could relate to. And then the actors did a brilliant job giving incredibly layered performances that are watchable again and again. Some of the scenes still make me laugh and I’ve seen it hundreds of times. I think this helps when judges are watching a film for the twentieth time to see it favourably.

LBB> What was it about the brief that originally appealed to you?

JR> It was just such a good idea written by the lovely Rich [Brim, art director] and Dan [Fisher, copywriter]. I remember writing in the treatment that I’d never been given a range of products that in themselves were very funny. You don’t really get funny products as a whole. It’s an incredibly rich starting point for making a film, so the hard work was done for me before we started rolling!

LBB> Your collaboration with adam&eveDDB seems to have been particularly successful in the past year or so, not just with Harvey Nicks but with other projects like Marmite. Why do you think you and the team there have collaborated together so fruitfully?

JR> Trust. I love adam&eveDDB because they’re so trusting of me. A creative duo and director should be a great team who build an idea together, but a director will always needs space to do whatever their thing is. To be given space is incredibly motivating, as you need to then prove that their trust was worth it. I’ll always work myself silly for agencies that imbue that sense. It’s a lovely thing.

LBB> 2014 is shaping up to be  pretty good for you so far – as well as the Cannes Lion you’ve also released your feature debut, Downhill. Why was now the right time to start expanding into the big screen?

JR> I don’t know really, it just sort of happened. I adore working with actors, it’s one of my favourite parts of the job – I love the subtleties of human emotion and seeing it recreated on screen. I guess I just wanted to hone that skill, working with some incredibly talented actors in the process. There’s also the inevitable love for storytelling and the desire to play a tale out over 90 minutes rather than 90 seconds!

LBB> The story is lovely and I think one that really strikes a chord (with me anyway!). How did the idea to delve into the world of hiking and male bonding come about? Are you a big hiker yourself?

JR> That makes me very happy to hear! Originally we (Benji Howell, my producer, and I) wanted to make a road movie, as there’s something about stuffing four guys in a car that we knew would bring out the best and worst of their characters. But one of the troubles with England is that if you get in a car, you get to wherever you want to go a bit too quickly, so we made it ‘a road movie on foot’. The line from our poster sums up the film well I think: “Four old friends. 192 miles. What could possibly go wrong?”

As for me being a hiker… we did a couple of legs of the Coast to Coast walk [across England] as research for the film. I remember thinking “I’m quite fit, how hard can it be? It’s only September, it’s basically summer”. About two hours after having that thought, I was up at the top of a mountain nearly being blown off my feet by almost horizontal hale. It was absolutely brutal. My frozen fingers swelled up to the point where I couldn’t even hold the sodden map, let alone turn the pages (which were falling apart anyway). It’s only because we met someone with a GPS system that I’m here today to tell the tale.

So no, I guess I’m not a big hiker… but maybe one day I’ll actually do the Coast to Coast. It’s awfully beautiful up there.

LBB> How did the process of shooting an independent film compare with commercials? And what sort of edge or insight do you think your commercials background gave you when approaching the film?

JR> The food on our shoot was terrible (for budgetary rather than culinary reasons). I love a ham sandwich at the best of times, but after you’ve had them day in day out for three weeks on the trot, the taste tends to get old. The cast got so fed up with them they made up a song about them which I could sing it for you if you were here… maybe it’s best you aren’t here.

My commercial background, I guess, gave me a desire to produce a film that would appeal to a broad audience. I didn’t want to make an art project. I wanted to produce an entertaining 90-minute story that people would enjoy and get something out of. If people feel a little better about life, even if it’s just for a few minutes, having seen ‘Downhill’, then that will make me very happy.

LBB> Was directing and filmmaking something you always wanted to do? When you were little what did you want to be and do you remember the first time you started messing around with a camera?

JR> Oh dear, I think I might disappoint you here. When I was very little I wanted to play for Chelsea. And when my footballing dreams had been shattered (I didn’t even make the school team, so I reckoned Chelsea was long shot) I wanted to be a hotel manager. I am incredibly happy that my hotel management skills matched my footballing skills, and I looked to into more creative fields.

I was incredibly lucky with my first directing job (the Trojan condoms virals made with the lovely Ed [Robinson] and Matt [Smith] at The Viral Factory), and that was really when I first got to play with a camera.

LBB> Looking back over your reel I was struck by just how many spots were there that had stuck with me over the years – the VW ‘Baby’, for example, Discovery Channel’s ‘Boomdeyada’ and Samsung’s LED sheep were real favourites of mine when they came out. Which past projects have you been proudest of and why?

JR> That’s lovely to hear also! It’s tough to pick out favourites, though – there have been so many that I’m incredibly fond of. I’ve been lucky enough to work with some fantastically talented people over the years and had some fantastic experiences. Perhaps the three relationships that stand out are The Viral Factory and Outsider as my lovely production homes, and then latterly the wonderful adam&eveDDB on the agency side.

LBB> I really admire your ability to capture these real subtle emotional moments that are understated yet convey so much emotion (Harvey Nicks ‘Sorry, I Spent It On Myself’, McDonald’s ‘Hunter Gatherer’, VW ‘Baby’). As a director, how do you work with actors to help them work so naturally and really connect with the audience?

JR> Thank you! I love the subtleties of human emotion, I guess I’m a sensitive soul. But I also like to give my actors space, allowing them to really inhabit the character that we’ll have created together. Then the emotion you see on screen is real, and that’s when it can be really special.

JR> It has! I’ve loved every minute of it. I’m going on holiday in less than two weeks now, which I’m very excited about. We’re driving an RV through California. I can’t wait! As for what happens after that… that’s the wonderful thing about this job. I have absolutely no idea!