Grey Malaysia’s ECD on his incredible ‘Your Plastic Diet’ campaign, a career that has taken him across the world and how lockdown inspired his team to ‘adopt a keg’ 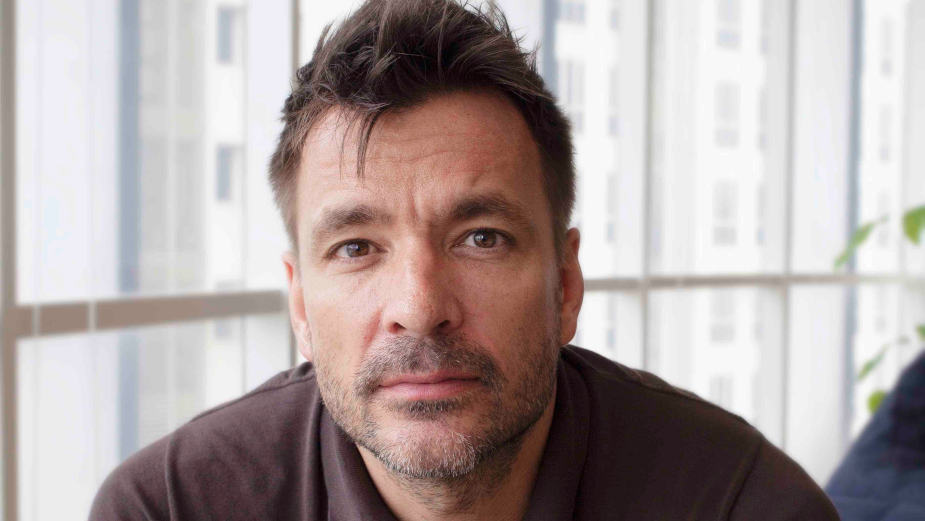 Graham Drew is jealous of people with a ‘plan’, knowing that they want to work in creativity. He can’t say that he had that himself, but fortune has played a part in his life that’s led to an advertising career that’s taken him from London to Malaysia. Currently the ECD at Grey Malaysia, and a member of the Grey Global Creative Council, Graham was also the founder of VCCP Kin, the branded content arm of VCCP.

One campaign he was involved with, ‘Your Plastic Diet’ for the WWF, stands out as a particular highpoint, even in this glimmering career. To date, it’s turned into the fastest and biggest single public action in WWF history - so far causing 80 countries to agree to a treaty on plastic pollution.

LBB’s Natasha Patel caught up with the man himself to hear more about his career and campaigns.

LBB> What role did creativity play in your childhood, and when did you decide that you wanted to do something creative with your life?

Graham> I wish I could say I was shooting stop motion on 8mm with my Lego from the age of seven, nothing that predestined ever happened. But mum got me into reading, Roald Dahl remains a hero and ‘Danny the Champion of the World’ – the father, son relationship in that really struck me.

I’m very jealous of people who have a plan. I never decided to ‘do something

creative’, I’ve just been very fortunate to be able to find things within jobs that I’ve been passionate about doing.

LBB> Outside of advertising, who are your creative heroes and why?

Graham > Thomas Heatherwick – I saw his ‘Seed Cathedral’ and the concept just blew my head off. Then I looked into all the other things he did - the range, breadth, beauty and just downright cleverness is another level entirely. I’m happy with my box of crayons knowing that people like that exist.

LBB> What could the rest of the world learn from Malaysian creativity?

Graham> Too much. There’s a wealth of insights and raw potential here, but too often a certain humbleness gets in the way. Aiming high is not a privilege, ambition should not be confused with arrogance. We are a lot better than we think we are.

LBB> If you could go back in time and give your younger self one piece of advice, what would it be?

Graham> When I was about 11, I wanted to learn the guitar, but the music teacher said I had to learn recorder first. The recorder IS a sh*t musical instrument, it DOES look and sound crap, ‘London Bridge’ IS falling down (the one thing I did learn to play). But I clearly DIDN’T want it enough. So I gave up on learning music. So now I can’t play any musical instrument, and I really wish I could.

LBB> It’s an interesting time to ask this question, given the cancellation and postponement of some global and regional shows (Cannes, Adfest...), but what are your thoughts about the role of awards in the creative industry?

Graham> 90-95% of any agency output needs to be the stuff that sells hard, pays salaries and keeps the lights on. This is the most important thing. It’s also the stuff that hardly ever wins awards. But it’s the creative spark, the ability to make something artistic and unexpected that solves a problem that is our industry’s most precious resource. In a time when algorithms are replacing everything, we have to set our sights on nurturing the things that logic and computers can’t do – and that is abstract creative leaps that make no sense until you see them. Only humans can do that.

Awards play a crucial role in creating the environment for this kind of thinking, for setting new benchmarks and stuff that fills you with the best kind of jealousy. The downside is, it’s also very easy to be cynical about awards, for good reason. Poke your finger into any of the shows, and it’s not hard to fish out the ‘this clearly only ran once in a bus shelter 187 miles from the nearest sign of life’ work. The work that makes you feel sad, you can almost smell the desperation (or worse, hear the evil cackle) of the creatives sweating it out. Unfortunately, this is a symptom of the insane pressure put on creatives to get metal – for their network score, for their salary – awards for award’s sake. This isn’t good, and there is too much of it. But, at the end of it all, it’s up to you if your work lasts longer than two weeks in April, if it’s real or not. It’s a choice.

LBB> What drew you into the industry?

Graham> I did an English degree and wanted to be a journalist, that didn’t work out (the pay was so bad, I couldn’t afford to move out of mum and dad’s house), and I fell into PR. I learnt so much from having to come up with ideas that only exist if you can convince a journalist on the other end of the phone to write about it. The buzz of seeing your idea in newsprint, or on TV is like nothing else.

It hardwired into me a question: ‘Why would anyone talk about this?’ as a test to every idea. To this day, I instinctively think like a journalist, that’s how your ideas get famous.

Later, I started a PR agency with my great friend Michael Frohlich. We’d sit in ‘all agency’ meetings with the ad agency showing their amazing ad that had 30x our budget and was paid to be looked at. That used to really piss us off. I’m now in Asia with Grey and he’s now ruling the Universe with Ogilvy. Whenever I’m back in London we get together, stare at the skyline and evil laugh at each other.

LBB> What inspired the ‘Plastic Diet’ campaign? Is it one you hope will be adapted globally?

Graham> It was a global brief to the whole Grey network – how can WWF help reduce plastic pollution leaking into nature? I set this brief open to the whole Malaysian team – we must have had 20 ideas, lots of great scare tactics, but one stood out.

A new young team, Kevin & Selva, found this fact that microplastics were now in everything – including the water we drink. It was a scientific fact that was out there, but nobody was talking about it. Over the next few weeks the three of us had lots of beer and coffee, I asked them to make sense of the data to quantify it in everyday terms (another old PR tactic) – we speculated and came up with ‘you eat a credit card of plastic every month’. That’s a headline. That’s a huge ‘why would I talk about this’. WWF bought the idea, we commissioned scientific research and found that it was far worse - you eat approximately a credit card a week. It took an environmental crisis and made it personal, now it affected ‘you’, not just a tragic seabird that is far easier to ignore.

Your Plastic Diet has turned into the fastest and biggest single public action in WWF history - so far 80 countries have now agreed to the need for a Globally Binding Treaty on plastic. Our work is now referenced in schoolbooks across Europe and used by other NGOs and governments around the world to wake people up and make them want to change things. I’m really proud of what we did.

Tesco Malaysia is the largest supermarket in the country and had halved the number of single-use plastic bags between 2011 – 2017, but the rate of reduction stalled.   Despite the world talking about the Plastic Plague, still only an average of 5% of all Tesco shoppers reused their bag in 2017.  Our key goal was to find an effective way to accelerate the reduction and change shopper behaviour.  An innovative change in design transformed the bag into an active agent of behaviour change, leading to the greatest reduction in single-use bags in Tesco Malaysia history, since launch the Unforgettable Bag has led to a reduction of 20 million single use plastic bags.  A simple innovation led to an overall 26% reduction in the total single-use bags and it’s still going.

LBB> What effect do you think the global pandemic has had on the industry?

Graham> Clearly the ‘physicality’ aspect will have a lasting impact. People don’t have to get on every plane and sit in every meeting like they used to. Teams don’t all have to physically sit together in massive offices. That’s an old legacy that is no longer relevant or makes business sense.

But – there is no ‘remote’ substitute for all sitting together and kicking a brief around. Nothing can replace the randomness of one person sparking off a whole new tangent, that led to an abstract leap – just because someone said ‘trumpet’. Brainstorming on Zoom is not a thing.

LBB> How have you adapted to working from home?

Graham> Like everyone, this situation has held up an irrepressible mirror to what really matters. The answer has always been ‘family’, but it’s only when you’re really forced to look, do you see all the little things that you’re missing. The other day I noticed that our youngest, Delilah, still does a little skip as she’s walking along. All the innocence and magic you hope your kids still have, wrapped up in a moment too often missed. Trying to keep looking for precious things like that I think is the biggest lesson I’ll try to take away from this.

LBB> Your career started in London and has taken you to Malaysia, where have you worked in between and do you think this has had an impact on your creative visions?

Graham> I’ve done a few projects overseas, but until now have always been based in London. Your ability to come up with fresh ideas is directly related to the volume of different things you’ve exposed yourself to – coming to Asia has been brilliant. The Grey Creative Council is the other – being in a room with people better than you is always a great thing to do.

LBB> Tell us something completely random about yourself

Graham> I always have to think which is left from right. The trick is, that I write with my right hand, that’s the only way I can remember.

LBB> What is next for the business? Tell us anything exciting you’re working on

Graham> We recently took on Carlsberg, both in Malaysia and Globally. The CMO, Julian Marsili, has such an infectious enthusiasm and ambition for the brand he’s going tomake us do great things whether we like it or not. Perfect example is ‘Adopt-a-Keg’ – it came from an original idea that we had in Malaysia, that was already under development, but slowed by the Pandemic. But during a call with Javier Campopiano (Grey Carlsberg CCO) we started talking about it. He thought we could make it relevant for now, we came up with a new twist on the idea.

Next day Emiliano De Petri (Grey Carlsberg ECD) joined in, added more. Ten days later we are all remote directing a shoot in an empty bar in Copenhagen via WhatsApp. 4 days after that, we launch Adopt a Keg, next day thousands of people have adopted kegs. We are now launching it in Malaysia and other countries are coming on board. If that’s a sign of things to come, I’m excited.