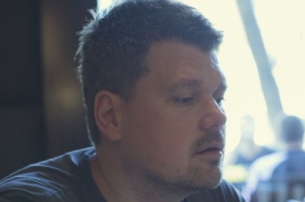 If there’s one thing that winds up McCann Sydney ECD Dejan Rasic, it’s adland’s obsession with buzzwords and the way the industry puts trendy lingo ahead of ideas. And with 18 years in the industry and 14 Cannes Lions to his name, he knows a thing or two about good ideas. His focus on the solids of creativity means he’s also an advocate of advertising younglings mastering the basics of their craft.

Over his career, he’s worked in Australia, London and Singapore and in 2007 co-founded the agency Colman Rasic and Carrasco, where he became involved with MTV EXIT, the anti-people trafficking campaign. LBB’s Laura Swinton caught up with him to find out more…

LBB> How did you end up in advertising? Was there something that inspired you to go in that direction or was it a bit more accidental?

DR> I was really only into the creative subjects at school and was lucky to have an inspirational art teacher called Rob Schumacher. He was more a mentor and introduced me to the idea of advertising as a career path. I toyed with industrial design for a while but sucked at Math. So here I am.

LBB> Did creativity play a big part in you childhood?

DR> I loved making things, drawing and writing from a really young age. When dad got our first video camera, I was obsessed with making films. I had parents who really encouraged creativity and didn’t mind me scribbling all over the walls.

LBB> You’re a creative partner at MTV Exit and have been involved since 2007 – how did you first get involved in the foundation? And why is the cause important to you?

DR> I pitched for the MTV EXIT account soon after starting my own agency in 2007. We we’re invited to pitch on the back of my ‘Welcome Snoop’ campaign for MTV Australia, which had a really successful run at Cannes. Little was known of human trafficking back then and mainstream media was only really starting to report on it. The more I read about it, the more I realised just how important an issue it was. Human Trafficking wasn’t some distant problem either, it was happening right on our doorstep. The stories from victims were truly horrific and I couldn’t believe how many people’s lives were impacted by it.

LBB> What’s the experience of being involved in MTV Exit been like? What have been your most memorable experiences with the foundation?

DR> It’s been really rewarding to help get the message out there and see the conversation grow globally. I worked with an incredibly talented team of people at MTV EXIT on music videos with a message for artists including Radiohead, MUSE, The Killers, Birkii and Simple Plan. We localised the idea across different countries as well. In Greece for example, I worked closely with rock artist, Alex Kavvadias on a song and music video to highlight the issue of sex trafficking. Seeing the media coverage generated by the campaign is really satisfying. It felt like we really achieved our objective.

LBB> You’ve been at McCann Australia for coming up to two years – which projects have been particularly exciting or fun to work on in that time and why?

DR> Soon after joining, we created a new music video for MTV EXIT together with Birkii, an electro-pop artist out of Paris. She produced a powerful track for the idea and we we’re lucky to work with a fantastic production team led by Director Tim Reckart out of Los Angeles. The video was released in multiple languages and it became a useful educational tool to highlight the dangers of human trafficking and the tactics criminal organisations use to target their victims.

Our work for Sprite has also been a whole lot of fun. We re-launched the brand as the antidote to awkward social moments. Right now, we’re in production on a number of new integrated campaigns, which I’m really excited to see the outcome of.

LBB> You joined after the McCann Australia Melbourne office really was really rocketed into the global consciousness with Dumb Ways to Die – what was it like entering somewhere that was having such a ‘moment’?

DR> There was a real buzz on the back of that work but there was also a desire to keep the momentum going.

LBB> McCann’s motto is all about ‘the truth well told’. What’s your truth?

DR> I’m personally not one for philosophies. It’s simply about the power of ideas. Ideas drive everything. Whether it’s a film or an invention, it all starts with a sheet of paper. It’s either average or exciting and that will never change.

DR> From a media perspective, we have a lot more toys to play with and more ways to bring ideas to life. I like that we’ve finally stopped viewing digital as a separate thing. Culturally, we have also established our own tone of voice and you can see more Australian humour coming out in the work.

DR> Some clients still lean heavily on concept testing and take it very literally. I thought by 2016, there would be a different approach at least. We still find ourselves on the other side of the awkward two-way mirror, watching people eat pizza and comment on storyboards.

There’s also the disease of the buzzword as the solution. If I hear the word ‘content’ one more time… And there’s still confusion around the medium versus an idea. There’s this desperation for brands to replicate what happens online and to try and behave the way people do in social. By the time brands get around to copying this, it’s too late and irrelevant anyway. It becomes try-hard.

LBB> On your Twitter you speak out quite a bit about the buzzword bingo of modern advertising… which buzzwords wind you up most and why?

DR> Ha, where do I start? I hear things like ‘snackable content’ thrown about in meetings like it’s a thing. How about ‘Aspirtainable’ – something aspirational but also attainable (apparently). It’s really all just nonsense.

LBB> Is there anything the industry can do as a whole to combat this?

DR> I think we could all just start calling bullshit when we hear people talking like this. It all gets found out in the end anyway, because buzzwords generally have no meaning.

LBB> What advice would you give to young people thinking about getting into the industry?

DR> It’s all about not giving up and pushing yourself harder to crack something great. It’s human nature to stop thinking when you’ve come up with a solution. Great work comes from not stopping.

I would also encourage young people to learn the basics of advertising. Working within a static format (a poster or print ad) is still a great way to develop your skills. The limitations of it make you think harder. I remember learning a lot from an old book called the ‘Craft of Copywriting’ by Alastair Crompton. It may be old, but it’s still relevant. The thing to remember is… it’s an incredibly competitive industry and if you want it more than anyone else, you will probably get a job.

LBB> How do you get through a creative block?

DR> I like to mind-map ideas on a pad. When I get a block, I try to reframe my thinking around a different area or even a random thought.

LBB> Outside of advertising, what sort of thing gets your creative juices flowing and why?

DR> I think it’s important for creative people to get out of the office and be inspired by stuff outside of the industry. So yes, all those things are great for inspiration. Go to an art gallery, watch a film or listen to a great new album. It ends up in your subconscious. When you’re thinking of ideas, you draw upon experiences and memories. It adds to the richness of the thinking, particularly in execution. Being glued to a desk day and night won’t help.

DR> Within advertising, I admire John Hegarty. He’s managed to keep BBH consistently strong for so many years. You have to respect that in an industry where agencies go from hot to cold all the time.

Outside of advertising, I like the work of Marina Abramovic a lot. Everything she does is conceptual. She’s been creating art since the 70’s and she’s more relevant today than ever before. The ability to constantly reinvent herself is amazing.