The famed satirist speaks to LBB’s Adam Bennett about British culture, the role of laughter in politics and how to ‘make progress as a prat’ 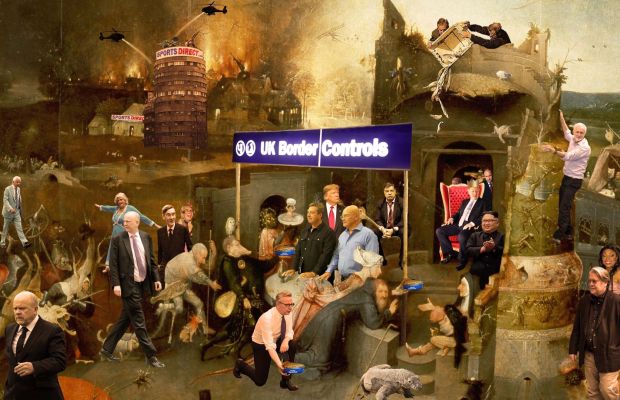 If one positive can be taken from our era of political upheaval, it’s surely that it’s never been a better time to be a satirist. For Cold War Steve (nom de plume of Christopher Spencer), public interest in his work has never been higher. The Twitter sensation (“I hate being called that but I suppose it’s fairly accurate!”) has amassed over two hundred thousand followers, created a front cover for TIME magazine and had his art featured at the National Galleries in Edinburgh.

He’s also about to release his second book, ‘A Prat’s Progress’, later this month. A follow-up to ‘The Festival of Brexit’, the book will take readers on a ‘coach trip from hell’ through the ‘dystopian wasteland’ of Brexit Britain, all in the form of Chris’ now-iconic satirical collages. The art features British politicians and cult ‘Z-list’ celebrities rubbing shoulders with the likes of Kim Jong Un and Donald Trump in front of surrealist backdrops. It’s somehow both utterly bizarre and a perfect guide to understanding the right-wing surge in British politics that has engulfed the country since the 2016 Brexit referendum.

To discuss all of this and more, Chris spoke to LBB’s Adam Bennett

LBB> First of all I have to ask, how does someone get into something like this!?

Chris> It actually started as a kind of therapy, following a bit of a breakdown and issues with alcohol. So I decided to do something positive, just on my phone. It was just this thing I did in my down time, but I shared it on Twitter and it seemed to capture people's imagination. It’s amazing how quickly it’s grown into this beast!

LBB> It is a beast, but you are so quick to get these things done! I’ll be reading the news at lunchtime and you’ll have a piece up on Twitter later that afternoon. How do you do it?

Chris> Well, we’re living in terrible times but conversely great times for satire. I mean, I would swap all this to go back to some semblance of normality in the political world but it’s just so chaotic and terrifying. My way of dealing with it is just to come up with something that will make people laugh, bring a bit of light to it and show them up for what they are. So yeah, as soon as I hear the headline for a story there’s a part of my brain that’s connecting it to a picture I’ll put together later.

Chris> I always think back to the London 2012 Olympics and the opening ceremony by Danny Boyle. I think that was this brilliant celebration of Britain’s culture and heritage and history and that whole period was just so uplifting. The whole country seemed to be proud of what we were in that we were a diverse and welcoming country. And it just seems we’ve gone from that to a really worrying time in our history where it seems like there’s been a far-right coup and the country is split, divided. It’s horrible.

LBB> But is there a part of you that would miss satirising this mayhem if it did stop?

Chris> Well, I've given up the day job so I could focus on it, yeah. It was difficult to juggle the two and now I'm trying to make a career out of this. But I think these people, they’ll still be there whatever comes next. I am conscious of putting all my eggs in the Brexit basket, and I touch on other issues like the climate strike and stuff like that. The Tower Bridge one, for example - that was an intense one. With pictures like that I fall into a sort of pit, it’s so immersive. I can’t look at it again for days! I mean that’s quite an overbearing image in and of itself. It takes a day or so to acclimatise back to reality after working on one like that. But then others, like the one I released this morning, take just an hour or so.

LBB> You mentioned the day job - did you work in design or creativity before this?

Chris> No, not at all. I went to an art college, and it's something I’ve always liked and enjoyed. I used to make collages in the early ‘90s but recently it's just been really mundane jobs. The whole art thing has kind of come together because of certain things. The technology makes it easier to make this stuff and Twitter makes sharing it that much easier. And then the feedback, there's that engagement you can get straight away. So it's just the right time politically as well, everything is lined up and I tried to seize the moment.

LBB> Is it photoshop that you use?

Chris> Honestly, when I started it was these £2 apps you get on the iStore and I'd do it on the way home from work or in bed. But since I’ve got more popular I’ve been commissioned to do big pieces, magazine covers and such, and I’ve had to learn stuff about high resolution and other things that I didn't know anything about. Because a big massive piece can't be done on a phone it needs to be on photoshop to get the resolution right. But before I do it on photoshop I still doodle a rough idea on my phone or iPad.

LBB> Of course, the art is very Britain-centric but there are international characters. Are you trying to say something about the British psyche, or something broader?

Chris> It’s intrinsically British in the sense of humour and the cultural references, I’ve no idea how it would translate internationally. I imagine quite badly! Having said that, it seems we are in a bit of a boom time of grotesque characters around the world to use. Kim Jong Un is almost beyond satire with his hair and the way he acts, and Donald Trump never fails to say or do something stupid. And of course we’ve got our own Boris Johnson now as well. For God’s sake, if you’d have said in 2012 we’d have Boris and Trump in charge I would have thought you were joking. And now it’s a joke that’s gone too far. And they have to be satirised and laughed at.

LBB> Do you think that satire helps? Is it making a difference?

Chris> It certainly helps me! I think it can help people, when the rhetoric in politics is so disturbing and grim we can come together and laugh at them and what they’re doing. On a political level it might not make a difference but if it's helping us all get through it then it's worth it.

LBB> With the likes of Johnson and Trump - do you think part of their appeal is that they are a bit of a joke already?

Chris> Possibly. I just think both of them have done whatever needed to be done to get where they are and if they need to pretend to be a joke from time to time then that’s fine. Johnson for example, he plays the populist card, he says and does things he knows will strike a chord with a certain portion of the press and population. I’ve got no idea if he means anything he says, but his fans all love him. If you imagine Corbyn or Abbot [two high profile politicians from the opposition Labour Party] saying that stuff they’d be torn to pieces. But do it in a plummy accent and you can get away with it.

LBB> How do you choose your background images? Do you have a big file waiting to be used at the right time?

Chris> The background is usually the starting point. I do have a weird catalogue of images saved on my laptop - it’s quite enjoyable sourcing them! I have to be mindful of image rights so I buy a lot of backgrounds. I had to print off a picture for my daughter’s homework the other day and it opened up my backlog of images - she just ran off in embarrassment as she saw this pile of Z-list celebrity mugshots! But I normally get the background, try things out with putting different images on and moving them around, because I’m trying to make it funny, make it have a message, but also have it look nice on someone’s wall if they want a print of it! So there’s such a balance you have to strike.

LBB> So when you do this work, do you feel that you are describing Britain as a whole, or just a part of it?

LBB> But is that part the mainstream now? Is what you’re doing counter-culture?

Chris> Well I suppose I like to think it is, really. There is that balancing act- it’s like you have a favourite band who are a bit shambolic, and they don’t have that many fans and you really get into them. But then suddenly they become successful and they’re playing to big arenas and you think they’ve become twats and you don’t like them anymore.

LBB> Are you saying you’re on that kind of journey yourself?!

Chris> Well, it’s something I'm conscious of! The followers that I’ve had since the start, I am wary of them thinking I’ve become a sell-out. I don’t want to become the next Bono or Sting. So if I can keep it fairly absurd then I think I’ll be okay!

LBB> So how did the cover of TIME go down with the original followers?

Chris> That was my main concern - I didn’t want to be saying ‘Look at me, I’ve done the cover of TIME!’. But despite my reservations they all seemed to be really supportive, just saying ‘well done’. Which was a relief and also just lovely to hear because it was quite a restrictive brief they had. But at the end of the day to get Phil Mitchell and Cilla Black on the cover of TIME, that’s quite an achievement I suppose!

You can check out the story behind Cold War Steve's TIME cover here.

LBB> Finally, to put you on the spot - how is this all going to end?

Chris> Oh man, I don’t know. Who knows? Britain as a country is so divided now, the hardened leavers are even more hardened, the remainers are even more hardened. I don’t know how it’s going to end but I don’t think it’s going to be happy. I have family of course, like everyone, who get their news from the Mail and the Express [right-wing tabloid newspapers], and for some people nothing matters other than leaving the EU. It’s mad - before the referendum, nobody talked about parliamentary sovereignty or fish. And now suddenly everyone cares in this skewed, ridiculous way.

But to end the interview on a much happier note - I was commissioned to do this picture for the Edinburgh Modern and I didn’t want to do another of my depressing hellscapes. So I did something that celebrates the fact we still have all of these amazing, creative and wonderful people here, and they’ll all still be there after all of this stuff is forgotten and left behind. And that’s worth keeping in mind, isn’t it?

We’re excited to unveil ‘Harold, the Ghost of Lost Futures’, a large-scale collage specially created for us by @Coldwar_Steve to coincide with our fab exhibition #NGSCutPaste (https://t.co/1kIjnBTeRm) at #ScotModern pic.twitter.com/t95hnGqoLN