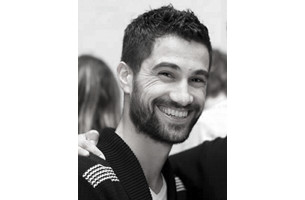 We've been wanting to speak to Andre Assalino for some time now. He's the person creative directors are whispering about. "If you want to get a handle on innovation he's the guy you need to interview." The Interactive Creative Director at MPC - the brains behind the recent X Factor TalkTalk app created with CHI and Partners and Believe - is proof of a long-held pet theory that VFX companies are the future of advertising. LBB's Laura Swinton tracked him down to learn more.

LBB> What kind of kid were you and where did your fascination with technology come from?

AA> I think I was a pretty normal ‘80s kid. Spent most of my free time playing outside, but whenever I had a chance I’d tinker as much as I could with my dad’s Commodore Amiga. At the time, it ran everything out of a floppy drive.

When I got my first PC I started devouring everything about it. I just had to know how the parts came together and how the operating system worked. Pretty soon thereafter, I was the guy my friends would turn to when their computers had issues. I think I wrecked as much as I fixed, so it could be worse!

AA> Creative Room was born because, in my final years of high school, I had started making some money by building websites for local businesses from my bedroom. It got to a point where I needed help to deliver, so I put together a small team and we started doing business in an actual office space.

That start gave me the confidence to be client facing and taught me early on about the realities of dealing with clients, even when budgets were miniscule.

LBB> It’s interesting that you’ve worked on the agency side of things and are now at MPC, which is best known for its amazing VFX. I’ve long suspected that VFX companies are the most innovative in the advertising industry precisely because they’ve always been about marrying creative vision and technology… I was wondering what your thoughts are on this?

AA> The idea of being able to rapidly influence rich visual outputs through coding has always driven me. So when the opportunity to work at MPC Creative came about, I was immediately seduced by the thought of working at a place that was purely focussed on creating spectacular visual experiences, along with innovation and an entrepreneurial approach so deep-rooted in its culture.

Knowing I’d be in the same building as some of the best 3D artists, colourists and motion designers made my head spin with all the possibilities. On top of that, the challenge was to use these MPC resources in new and innovative ways. That was all I needed to hear.

LBB> What do you enjoy most about your job at MPC?

AA> Being immersed in an environment outside of the pure above the line/digital bubble, where I can use my experience in different ways and aim for blockbuster VFX quality, on a whole host of platforms and spaces.

LBB> And what have you learned from being at MPC these past couple of years?

AA> A lot more about running a department and dealing with things I had never previously been involved with - shoots, colour grading, motion design, grooming, rigging, etc. The amount of detail that goes into what’s done here is just mesmerising.

AA> More recently I’d have to say the work we did with CHI & Partners for TalkTalk TV / The X Factor. We had to research and develop a series of creative solutions to allow people to create short high-end music videos from their own home. Seeing thousands of people daily having genuine fun with something you created is pretty rewarding.

LBB> Your role is an interesting one because it needs a kind of ‘big picture’ kind of creative thinking as well as the ability to understand different complex projects at a more granular level. How easy is it to balance these two ways of thinking?

AA> Working in small studios, where everyone did a bit of everything, really trained me for what I do today. Having now spent many years leading creative technology teams, a constant thread remains: I get involved at the inception of the idea, we flesh it out from a purely creative point of view – considering tech as we go along – and then when the project goes into production I get into delivery mode and focus on making things happen as previously envisioned.

LBB> What advice would you give any young people hoping to combine their love of technology and creativity in a career? I guess there doesn’t seem to be the same well-worn paths as there are for more traditional roles – and as technology evolves so quickly, the role of a creative technologist is also quite fluid too…

AA> The need for creative technologists broke the designer/developer boundary and it’s now okay for someone to be a bit of both. My advice is to learn as much as you can about what motivates you, but know where your strengths lie. Some creative technologists can’t really code, others can code extremely well but aren’t very good at understanding design. You don’t have to excel at all components. Just understand enough about a few of them and use that knowledge well.

LBB> I was wondering which tech innovations have got you particularly excited at the moment?

AA> Anything that can make people’s lives easier always gets my attention. For example, the ever-evolving possibilities created by 3D printing continue to amaze me – from 3D printed buildings, which could greatly help reduce the costs of homes and therefore put more people under a roof, to 3D printed bone-like implants, which would mimic missing or damaged body areas.

I'm also excited about the use of VR technology for educational purposes, since the unidirectional focus that comes with VR would allow for better, more memorable engagement. Not to mention the physical gaps it would bridge between locations. Imagine a group of students in South America, visiting the Louvre virtually, for example.

LBB> As VR becomes more mainstream, I’d think it’s going to be massive for companies like MPC, given their years of experience with CG animation and interactive…  Is this something you’re currently exploring? Any projects or collaborations on the go?

AA> MPC Creative is our content production division and covers a whole spectrum of new technology.  VR is part of a larger interactive landscape and it is definitely something we’re completely into. I think that second displays and virtual reality will have a big role to play in enhancing classic forms of entertainment. Being able to focus on different objects by looking around, or exploring different narratives within the same movie will mean that, from a storytelling point of view, different people will experience different things from one another, having watched exactly the same content.

At the moment we’re working on a couple of projects in this area, but it’s all top secret and will be revealed soon!

LBB> And as an Interactive Creative Director, what do you do to educate yourself about new developments or potential new avenues to explore, and just, generally to keep on top of everything?

AA> Aside from reading the many sources of information online, and playing with as many development kits as I can get my hands on, I mainly try to surround myself with people smarter than me and try to absorb as much as possible.

AA> More exciting projects and some technological playtime for me. Although in reality, constantly aiming for innovative work means that there’s a risk some clients may not share the vision, or not be willing to risk as much. It’s all about encouraging people to take the journey with you for the right reasons, and when they do… there’s nothing better.