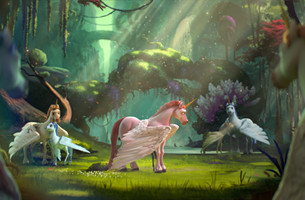 The 60 second animation, produced by Nexus, launches on Channel 4 at just before 9pm on Friday 20th March 2015.

The film tells the story of ‘The Outsider’ – a unicorn foal with underdeveloped wings and a twisted horn who is shunned for being different but fights with grit and determination to become a magnificent and unique racehorse.

The campaign aims to inspire a new generation of horse racing fans by showcasing the speed, stamina, strength and determination of a Grand National winning racehorse. Channel 4 continues its theme of celebrating the race as The Original Extreme Sport – the spirit of which having run throughout all of 4Creative’s award-winning promotional trails for the race across the past three years.

John Allison and Chris Bovill, Heads of 4Creative said: “People love the grand national because even the outsider has a chance. We wanted to dramatise this whilst at the same time blowing the whistle on all the prejudiced unicorns out there.”

Set in a mythological, fantasy landscape the film’s unlikely hero is cast out by his unicorn peers. He strives to run faster than they can fly which causes his body to transform. He bursts into the modern day, revealing himself as a natural born racehorse running in The Crabbie’s Grand National.

The promo’s emotive score was recorded at Abbey Road Studios by an orchestra of thirty musicians and was composed to evoke the drive and strength of a racehorse whilst reinforcing the grandeur of The Grand National.

Nexus directors Smith & Foulkes said: “We were tasked by Channel 4 to inspire a new generation of horse racing fans ahead of this year’s highly anticipated Grand National. In order to capture the nation’s imagination and heart, we tell the story of an unlikely hero’s epic journey, defying the odds to become a champion racehorse. We follow our hero as he desperately tries to run with the herd, stomping through the undergrowth and never giving up, before overcoming his disadvantage and taking a giant leap into a brave new world where he finally belongs. The script from 4Creative was a rare opportunity to tell an emotive short story, and our main challenge was to pack in as much action into a 60 second spot, whilst leaving enough room to get to know and empathise with our hero.  We really hope it strikes a chord with new, and die-hard racing fans alike.”