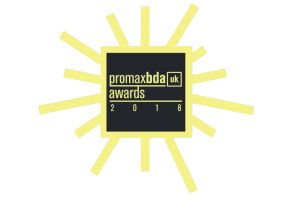 Elsewhere in the awards MTV UK scooped the ‘Creative Channel of the Year’ for its rebrand and new approach to creative and promos, as well as a gold for ‘Best Reality – Clip Based’ for Ex On The Beach Season 9. ITV Creative picked up five golds including ‘Best Production’ for I’m A Celebrity and ‘Best Use of Social Media: Content’ for Love Island Season 4. Sky Creative Agency picked up four gold awards and also saw Callum Anderson named as ‘Best Newcomer’ in the promo category while Discovery Creative London picked up two gold awards, including ‘Best Factual Entertainment - Originated’ for its OutDaughtered Digital Spot and a gold for Alice Parker as ‘Best Newcomer’ in the design category.

Landy Slattery, chair of PromaxBDA UK, commented: “It’s been a stellar year for entries into the PromaxBDA UK awards and the quality of the work being produced by all the entrants has gone up another gear. Congratulations to Callum and Alice for being recognised in the Best Newcomer categories and congratulations to both 4Creative and BBC Creative for their impressive hauls of gold awards. In fact, congratulations to each and every one that was nominated this year. Our aim at PromaxBDA UK is to celebrate all the creative corners of television and broadcast marketing and acknowledge the vast amounts of hard work that goes into creating such content.”