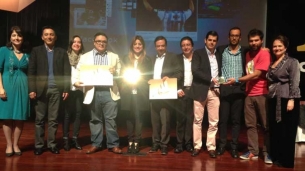 4am Saatchi & Saatchi has won a Gold Effie for its highly successful Tigo mobile app during the 2014 FIFA World Cup. Launched in partnership with FIFA, the Tigo FIFA app enabled users to watch all 64 World Cup matches live and in high-definition. The app also provided football fans with access to complete game coverage, replays and views from more than 8 interactive cameras.

“The success of the strategy is what helped us meet the brand objectives,” said Marcelo Alvarez Sagherian, Regional Account Director at 4am Saatchi & Saatchi, Guatemala. “It was an unforgettable night when we raised a Gold Effie; an award we are proud of because it has a very special meaning for us and our client.”

Following the success of its “Desfrijolizate” mobile data campaign, the FIFA World Cup was the perfect occasion for Tigo to showcase its product capability and increase consumer engagement. However, Tigo faced two challenges: It was not an official event sponsor, and if they were to create buzz during the World Cup, they would need to create a product that was both relevant and useful to the target audience. The Tigo FIFA app was a solution born out of football fans’ desire for unique experiences and the demand for broadcast of live matches.

The release of the Tigo FIFA app was done in two phases: anticipation and launch. During the anticipation phase, awareness was generated online using custom audience and look alike targeting and Google Search to optimize keyword searches that were updated following the conversation trends. 4am Saatchi & Saatchi also promoted app downloads through the Google App Store, used retargeting to complete the process of conversion and supported the entire campaign with a multimedia ATL campaign.

The app service was the first of its kind in Guatemala, with Tigo also being the only authorized FIFA mobile transmitter in the country during one of the biggest events in the global sporting calendar.