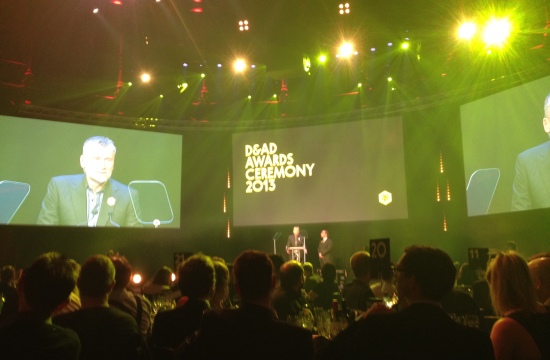 There were a total of 51 Yellow Pencils awarded to the best of the world’s design, advertising and communications work at the 2013 D&AD Awards, the organisation’s fifty-first anniversary.

In total, 618 awards were given by juries across In-Book, Nominations and Yellow, Black & White Pencils at this year’s awards, with work from over 35 countries recognised.

This year, in recognition of the highest calibre of creative work, four Black Pencils were awarded to four Australian and British campaigns:
•    McCann Erickson Melbourne’s “Dumb Ways to Die” for Metro Trains (Integrated & Earned Campaigns) scooped up one of the top accolades
•    4creative’s “Meet the Superhumans” for Channel 4 (TV & Cinema Communications);
•    Heatherwick Studio’s “Olympic Cauldron” for the London Organising Committee of the Olympic and Paralympic Games (Spatial Design/Installations)
•    GOV.UK’s website for Her Majesty's Government (Writing for Websites & Digital Design).
Incorporated into this year’s Awards for the first time, a coveted White Pencil was awarded to the United State’s Droga5 for their “Help! I want to Save a Life” campaign for Help Remedies.

Results by category
Film Advertising Crafts was the category awarded the greatest number of Yellow Pencils, with the jury recognising 12 entrants with Yellow Pencils.

Tim Lindsay, CEO of D&AD said: “Our fifty-first Awards was another outstanding year for global creativity, with thousands of pieces of work recognised by the juries. So, a big thank you to our almost 200 judges who have once again helped to make this the awards ‘for creatives, judged by creatives’.

“The quality of entries this year has been astounding. The craft skills of making great pieces of graphic design, TV & cinema, direct, film and illustration are as strong as ever. However it’s also great to see the written word being employed in such a diverse and multifaceted way. It demonstrates a big shift in understanding of what words can bring to design.

“The integrity and transparency of the judging process is legendary and is what sets D&AD apart from our awards so it’s just incredible to see the pinnacle of creative excellence coming through and continuing to raise the bar each year.”

Results by country
Entries from around the world were given awards at this year’s D&AD. The UK led a strong showing, scooping up 202 awards overall, including three Black Pencils and 12 Yellow Pencils. Work from the US also did well, with entries gaining 113 awards in total (of which 13 were Yellow Pencils).

In 2013, European nations performed well, with Sweden and France leading the way in the region with 16 Awards each, of which two were Yellow Pencils. German work picked up 13 awards overall, including two Yellow Pencils.

Brazil topped the Latin American league table of awards, with 29 pieces of work recognised by the juries, including four Yellow Pencils, a record 37% increase in awards from 2012.

Tim Lindsay commented: “The D&AD Awards have become a truly international awards, with more work entered than ever from around the world.

“This has undoubtedly been a spectacular year for Australian creative work. 57 campaigns were recognised by the juries, with McCann Erickson Melbourne’s “Dumb Ways to Die” for Metro Trains sweeping the board across various categories.

“It’s also particularly encouraging to see more Asian work coming to the fore. Japan continues to lead the charge but we also saw a doubling in the number of entries from China this year which is testament to the country’s thriving creative scene.

“The bar has been set immeasurably high and we hope creative professionals from around the world will rise to the challenge next year to achieve the highest possible accolade in creative excellence; it’s going to be very tough to beat.”